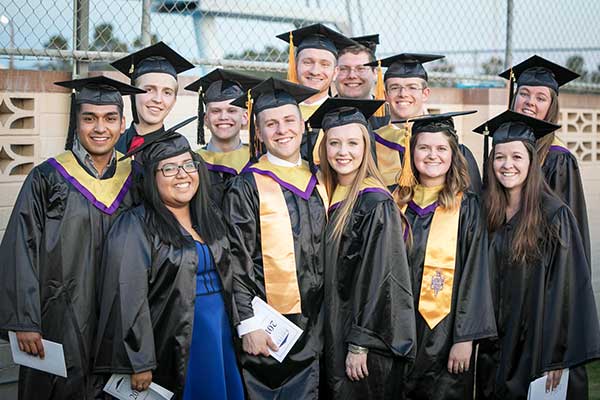 By Kris McBride and Lori Dugan

The students and the assembled audience of family and well-wishers will be called to order by incoming ASEAC student body president, Jacob Stiles-Culver, from Pima, Arizona.

Taking the podium on behalf of the graduating class will be 21-year-old Marshall Adams of Round Valley. Adams began his studies in music at age 11 and has continued under Professor Chase Moore at EAC. He has been an active member in various ensembles including: Marching Band, Symphonic Band, Symphonic Orchestra, A Cappella, EACompany, Women’s Chorale, and Jazz Band – serving as an piano accompanist or clarinetist. Adams is also a member of Phi Theta Kappa (honor society of two-year colleges) and received the prestigious “Outstanding Music Major Award” for the 2018-2019 academic year. Along with these awards, Adams was also named co-finalist and co-winner of the Eastern Arizona College Concerto Competition – performing Rachmaninoff’s Piano Concerto No. 2. Adams continues his studies this upcoming fall at the University of Arizona and will be pursuing a bachelor’s of music in piano performance under the tutelage of Steinway endorsed artist, Dr. John Milbauer.

David Henson will be the faculty speaker for the ceremony. He has been an EAC faculty member for the past 18 years. Currently, he holds the position of professor of biology and Science Division chair. Henson’s career history has encompassed most of the Gila Valley, having taught 17 years at Pima High School and six years at Thatcher High School before coming to EAC. Henson received his bachelor’s and master’s degrees from Northern Arizona University where he accepted a full ride basketball scholarship and was named an NCAA Academic-All American.

“Henson conveys a love and passion for teaching the sciences to his students and is known for his endless preparation and energy in the classroom,” said EAC dean, Dr. Phil McBride. “He believes each of his students’ education becomes his personal responsibility.”

The guest speaker for the evening is Gordon H. Smith, president and CEO of the National Association of Broadcasters, and a two-term U.S. Senator from Oregon. Originally from Pendleton, Smith attended college at Brigham Young University, received his law degree from Southwestern University School of Law, and practiced law in New Mexico and Arizona before returning to Oregon to direct the family-owned Smith Frozen Foods. Before his election to the U.S. Senate in 1996, Smith served in the Oregon State Senate, rising to the position of president after only three years.

Smith has strong ties to the Gila Valley; his mother Jessica Udall Smith, the daughter of Jesse A. and Lela Udall, was raised on Church Street in Thatcher in the boyhood home of Spencer W. Kimball. His grandfather, Jesse A. Udall, was a Graham County Attorney, state legislator, and Chief Justice of the Arizona Supreme Court. His sister, Charlotte Phillips, lives in Thatcher.

Prior to the commencement ceremony, the EAC Alumni Association will hold its Annual Alumni Banquet in the main dining hall of the Activities Center beginning at 5 p.m. Members of the EAC class of 1969 and this year’s graduates and guests are invited to attend.