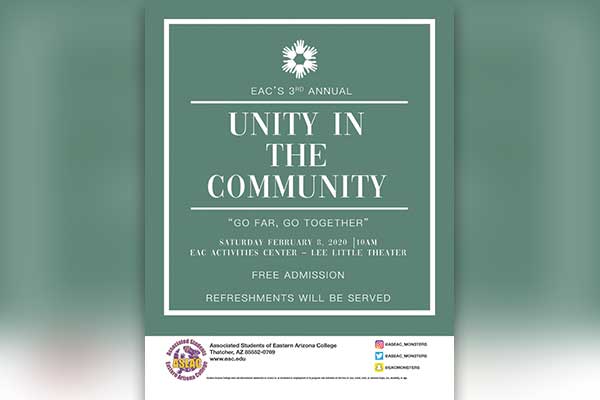 THATCHER, Ariz.— The Associated Students of Eastern Arizona College and EAC’s English Club invite the entire community to attend the third annual Unity in the Community conference on Saturday, Feb. 8, from 10-11a.m., in EAC’s Activites Center – Lee Little Theater. Admission to the conference is free.

The theme of this year’s conference is “Go Far, Go Together,” focusing on the things that unite us as a community, rather than what divides us. The goal of the conference is to provide a positive forum in which we can learn from each other, as we work to foster a more unified community, both at the college and in the Gila Valley.

Speakers will include EAC students and Intertribal Club members Brandon Faber and Davia Wiston, who will share their perspectives on making our community a more inclusive and positive one. Additionally, attendees will hear from Stuart Gibson, EAC art professor, who will speak about the word “ally” as a verb, emphasizing the importance of making a place for everyone.

The keynote speaker will be Whitney Steele, former EAC student body president, who recently worked at BYU during one of the university’s most trying, controversial years. After a devastating student suicide, a sexual assault policy controversy, and a protest against BYU’s honor code, it was clear that something on BYU’s campus needed to change. Steele shares what the university did to bring unity and respect to the forefront of their culture, and how listening to the stories of individual students healed the community and created an award-winning campaign. By respecting and caring for those who are different from themselves, students and leaders can create better communities.

For more details about this free conference, contact Melanie Russell at (928) 428-8480 or melanie.russell@eac.edu.