Todd Haynie was the first of the two candidates to address the onlookers. Haynie is currently the director of marketing and public relations at Eastern Arizona College. Haynie addressed those attending the forum, giving a brief background on his education and experiences. After this, Haynie told the crowd that he believed that to better the current atmosphere and community relations of the college, he wanted to ask the community and students what they wanted.

“We need to listen to what they’re telling us,” Haynie said. “We need to be a part of the conversation.”

When it came to the students, Haynie said that he intended to attract diverse students to the college.

After a half hour break, Dr. Phil McBride addressed the forum. McBride currently serves as dean of instruction supervising the Fine Arts, Mathematics, Nursing & Allied Health, and Science divisions as well as the Discovery Park Campus.

McBride introduced himself by telling the love story of he and his wife. The McBride couple met while in an EAC class, with McBride’s eventual sweetheart sitting in the front row while McBride sat in the last. Through comical illustration, McBride described their romance. McBride also told the story of his mentors at EAC, and how the college had influenced so many aspects of his life.

When asked what he knew about accreditation, McBride credited himself with the college’s eventual usage of the Open Pathways Process. In the last accreditation of the college, McBride was tasked with writing the federal compliance portal and spent roughly six to eight months on it. McBride also said that he revised, along with the help of others, the fire and safety report.

What grabbed the audience’s attention at the end of McBride’s forum was the fact that McBride dawned goggles and brought several glass beakers onto the podium. Mixing several brightly colored liquids in two glass containers, the liquid rapidly changed to bright yellow and purple.

“I am well prepared and willing to serve Eastern Arizona College as its next president,” McBride said. “So we can all transform lives together,” McBride said as he held up the two glass containers holding the yellow and purple EAC colors.

In a previous EAC press release, Governing Board President Lois Moody said that the next EAC president will be chosen by October 18. The job will be offered to one of the candidates at the regular board meeting. 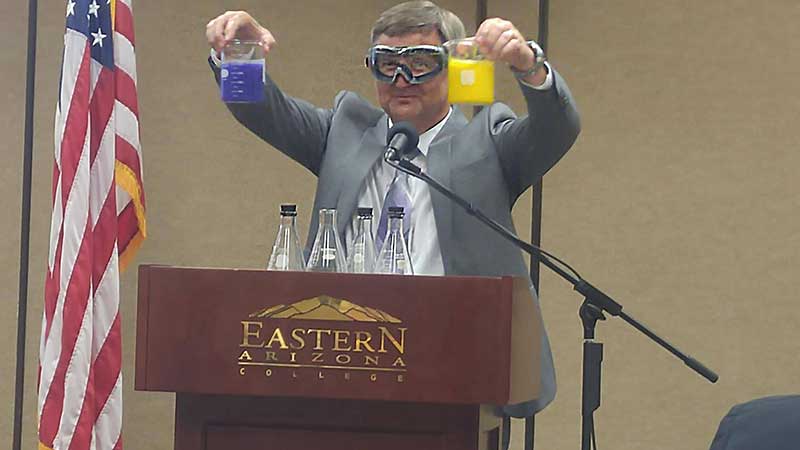