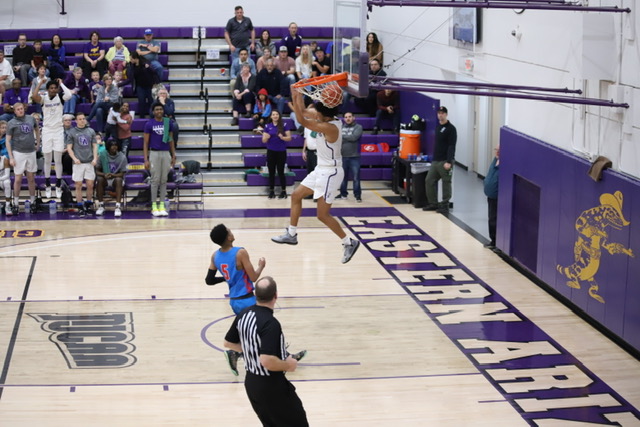 Collin Kelly puts the game on ice Saturday against Mesa with a reverse dunk. (Photo by McKenna Merrell)

THATCHER — It wasn’t quite like waiting 75 years for Halley’s Comet but for the first time since 2007/2008, the Eastern Arizona College Men’s basketball team hoisted the Region 1 Championship trophy by beating Arizona Western 93-73.

The Monsters were impressive again Monday night on both ends of the floor. EAC never trailed and led by as many as 26 throughout the night. Eastern was paced once again by Jalen Brown’s 27. He was named the tournament MVP as well after scoring 28 on Saturday against Mesa.

He wasn’t the only one with a big night as the three sophomores came up huge in their final home game at Eastern. Anthony Anderson had 16, Collin Kelly finished with 13 and Nate Pollard had 10 points and 12 rebounds.

Freshman Rayshon Howard had 14 points in just 21 minutes of the bench.

“Our sophomores were huge tonight,” said Eastern head coach Maurice Leitzke. “These guys have put in the work for two years to get to this point. I”m just really happy for them.”

The Monsters will now travel to Salt Lake City, Utah on Saturday to take on the #5 Salt Lake CC Bruins(27-4). The Bruins won Region 18 against Snow College 84-81 in the final. The winner of the District Championship will get the automatic bid into the National Tournament in Hutchinson, Kansas.