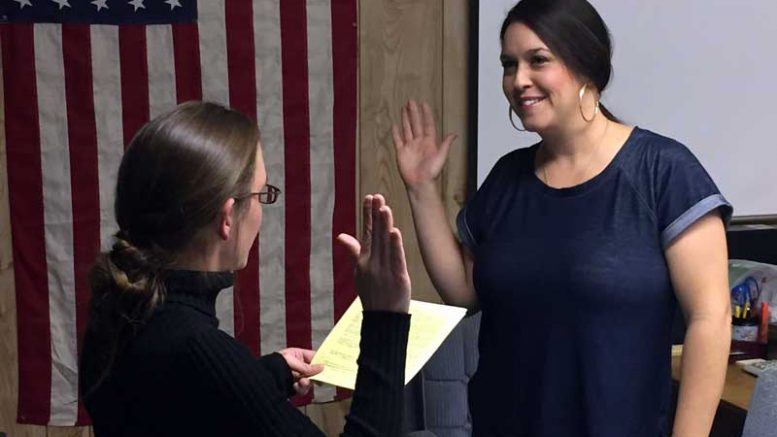 Contributed Photo/Courtesy Eldon Merrell: Rachel Griffin, right, is sworn in to her position on the Duncan School Board.

Prior to the Regular Monthly Meeting of the Duncan Unified School Board, a swearing-in ceremony and an organizational meeting were held.

Rachel Griffin was sworn in as the newest member of the board.  During the organizational meeting, Cece Jernigan was re-elected as board president, and Kim Lunt was re-elected to the board clerk position.  Both were the only candidates nominated and both were elected by unanimous 4-0 votes.  Member James Giacoletti was not in attendance.

The Board made no changes to their organizational structure. Regular monthly meetings will continue to be held on the second Monday of the month at the district office, and will continue to start at 6 p.m.  The Duncan Post Office is still the official posting spot for meetings, but they will also be posted at various other locations as well.

During the Call to the Public, community member Jackie Hale presented some information to the board about “I Teach AZ” and a couple of other programs currently available at Eastern Arizona College.  These programs are in partnership with Arizona State University and have received generous funding from Freeport McMoRan Inc. They are designed to train certified teachers for secondary positions that would remain to teach in the local area.  Participants can get a bachelor’s degree in one of several STEM subject areas in a short amount of time and at a reduced-tuition rate.  Some recent graduates of the program have already secured teaching positions.

During the communications section, Superintendent Eldon Merrell discussed some serious water problems that occurred over Christmas Break. A water pipe broke and flooded the high school locker room.  The school’s insurance is in the process of cleaning, removing and repairing.  The locker room is closed until repairs are completed.  An electrical short in the pump house at the elementary school led to a loss of water for several days.  It is fortunate that both events occurred while school was not in session.

Merrell also informed the Board that he would like to hand out contracts for the 2017/2018 school year a month or two earlier than has been done the past few years.  He feels the school needs to know who will be teaching next year as early as possible to begin the search for any needed positions.  Merrell also repeated his excitement that the junior high will be participating in Sea Camp after a one-year absence.  Marcy Harris is sponsoring this program. Several junior high students will attend Sea Camp in February.

Although there was a slight drop in enrollment as the new year began, the school is still up 12 students since August, with a current enrollment of 380.

During the new business section of the meeting, the board approved the hiring of Alan Hjorth as Woods Teacher.  Hjorth is not interested in continuing long-term, so the school will look for a replacement for next year.  Senior Class President, Lindsey Lunt, with the support of Senior Class Sponsor, Becky Bell, presented the Senior Class’s Senior Trip request to spend two days in California visiting Universal Studios and Knott’s Berry Farm.  The trip was approved by a unanimous vote, but not until after a somewhat traditional question and answer period, spearheaded by board member Bruce Lunt.

The board approved the hiring of several junior high and high school coaches for spring sports.  Johnny Basteen will coach junior high baseball with volunteer assistants, Robert Bejarano and Aaron Neilson.  Marcy Harris will coach softball with Stacy Hille assisting.  Luke Evans will coach golf, and Shannon Kempton will coach tennis.  Brandon Kempton will be a volunteer assistant coach and van driver for tennis. Eric Bejarano will coach baseball and Brett Jensen will assist.  Robert Bejarano and David Contreras will be volunteer assistants.  Due to lack of interest, the School was planning to cancel softball, but the girls who were interested rallied to find more potential players, so there will be a team with coaches to be announced later.  Superintendent Merrell also said there has been some interest in track and the school is looking in to the possibility of offering a limited program.  There being no further business, the meeting was adjourned at 6:56 p.m.