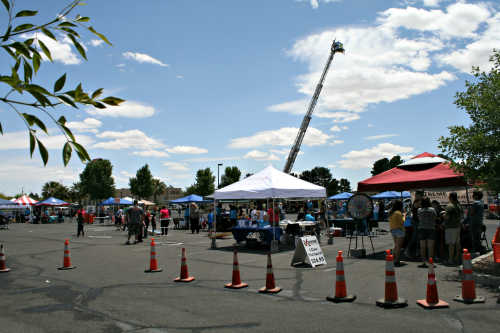 The event kicked off at ten o’clock on Saturday, April 30th at the Home Depo parking lot. Although it was a little warm, it was still the perfect morning for the family fun and educational day. The Thatcher Fire Department showed up, giving kids free tours of the fire engine. Later on in the day, a helicopter was scheduled to land in the same parking lot. There were multiple kid’s games, including bean bag toss, and spin-the-wheel. Vendors sold snacks and food to benefit local clubs and causes. The Safford Library gave away free books and pin-wheels, and the local police brought their rollover simulator.

Judge Peterson arrived at roughly ten thirty, and said a few words on the importance of recognizing child abuse. “Don’t be an ostrich,” Judge Peterson stated, “Don’t stick your head in the ground. If you suspect abuse, report it!” The Gila Valley Children’s Choir sang several special numbers as well.

Aside from the games and booths, the local police department were set up and collecting prescription drugs. Wearing gloves, an officer would take the drugs and place them in a cardboard box and tape it up. Toward the middle of the day, the police had filled roughly four boxes with excess prescription drugs to be taken and destroyed.

Two organizations were set up and distributing children’s car seats. WIC was at one side of the parking lot, while the Hospital Auxiliary volunteers were at the other. The WIC car seats were being given away to anyone who needed them. However, the Hospital Auxiliary took several extra steps.  Measuring each child’s height and leg length, the volunteers wrote notes on each car seat depicting the child’s name and emergency contact. Installing each seat specifically to the needs of the child, they gave away seven seats by noon that day. Last year, the Hospital Auxiliary gave out thirty car seats. If you’re reading this now and you’re upset that you missed your chance to claim a new car seat for your child, you still have time. “Come to the hospital and pick one up!” Jacky White stated. Many parents don’t know that their child is in the wrong size car seat, and that the car seat has expired. If you have any doubts, come down to the hospital and they will gladly help you. 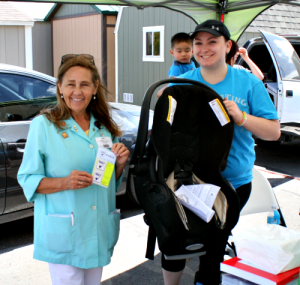 It was a fun and educational day for all. Children’s eyes lit up when they got to climb up inside the fire engine, and local parents were gifted with the peace of mind a new car seat brings. It was a great event for the community to get together and support each other.