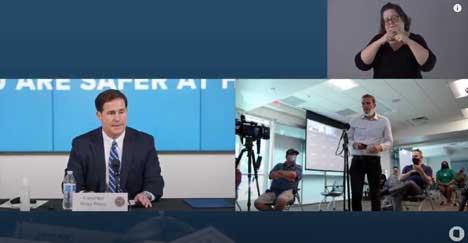 PHOENIX — “What we’ve gone through, and the challenges that I’m sharing with you, really is Arizona’s new normal. And it’s our new normal for the foreseeable future.”

Gov. Doug Ducey used those words to open his latest press conference on COVID-19 Thursday, where he announced the state would make face masks available for free for any resident age 65 and older. However, he declined to issue a statewide mask order, instead praising cities, towns and counties that put such orders in.

“There are two very loud lobbies out there. One is the ‘lock it down’ lobby, and they want to see everything locked down. And they weren’t even happy when we had a stay-home order and we did not have rising cases,” Ducey said. “The other very loud lobby is the ‘government’s not going to tell me what to do’ lobby. Very American thing to think and say; not during a pandemic.”

As to the opening of schools, he said the Aug. 17 start date remains in place.

“I’m going to tell you, our kids are going to be learning in the fall. We’re going to do our best to conduct the most positive educational year that we can,” he said.

He added that he will work with Kathy Hoffman, state superintendent of public instruction, on additional guidelines that he said will give “additional flexibilities” to schools. He said those new guidelines should be announced next week.

During a press conference Wednesday, Hoffman said the opening of schools should be delayed.