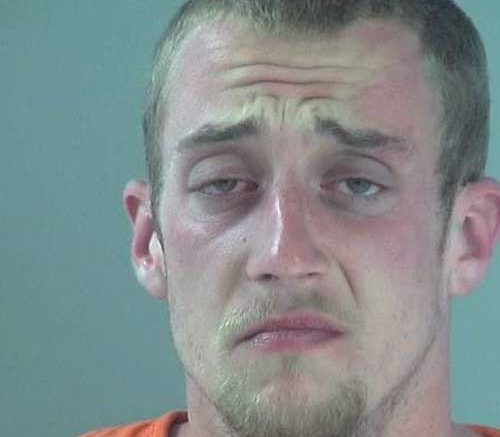 William Larue was booked into the jail Wednesday night after allegedly burglarizing a vehicle and attempting to break into others.

SAFFORD – An intoxicated man was apprehended Wednesday night after officers located several items in his possession that were allegedly stolen out of a vehicle.

William Dean Larue, 23, of Safford was booked into the Graham County Jail for burglary in the third degree and criminal damage.

Larue was found to have property and money on him that was allegedly taken from a car after the victim parked to drop her son off at karate practice in Downtown Safford.

According to a  Safford Police report, an officer was dispatched to Extreme Martial Arts at 514 W. 7th St. at about 7:49 p.m. regarding a vehicular burglary. Upon arrival, the victim said she forgot to lock her car when dropping her son off at karate class and witnessed a man exit her vehicle with her property. The victim said the suspect was wearing her son’s white headphones and carrying her wallet. She described his appearance and said he was dressed in a black shirt. She also reported she was missing her son’s iPod with a case that read, “Don’t touch my iPod” and that she had $160 in $20 bills in her wallet.

The suspect description matched an earlier description of a man (Larue) who was reportedly smoking in a victim’s outside of a restaurant on U.S. Highway 70. During that report, witnesses stated they saw Larue attempt to get into other parked vehicles. Larue was found walking behind a tire shop located on U.S. Highway 70 and said he was just trying to walk home. The officer noted Larue was obviously intoxicated and instructed him to leave the area.

While at the scene of the vehicular burglary, the officer was also informed that the same suspect reportedly attempted to break into at least two other vehicles in the area. One of the vehicles had damage to a door window, apparently caused by a nearby brick.

The officer then began to patrol the area and soon passed by Larue walking along Main Street while wearing white headphones that weren’t plugged into anything.

After being detained, the officer located a large group of cards with the burglary victim’s name on them, gift cards and her driver’s license in Larue’s pockets, as well as $160 in $20 bills and an iPod with a case that read, “Don’t touch my iPod.”

Larue said he didn’t remember taking anything and didn’t seem to understand why he was under arrest, according to the police report. A portable breath test showed his breath/alcohol concentration to be .096.

After photographing the evidence, the stolen goods were returned to the owner and Larue was booked into the jail.