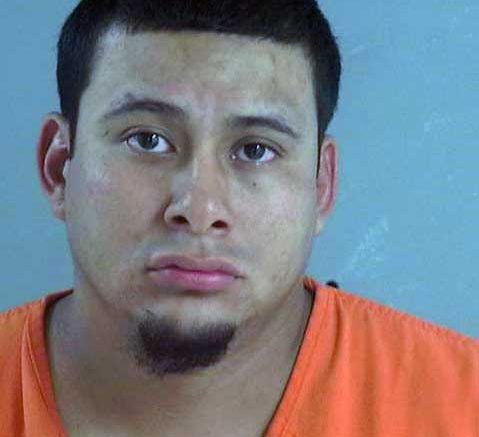 Contributed Photo/Courtesy GCSO: Lewis Garcia, 24, was booked into jail on charges of DUI, criminal damage and leaving the scene of an accident after allegedly crashing his brother-in-law's sedan while drunk.

SAFFORD – An alleged intoxicated driver crashed a car into ditch and fled the scene Nov. 10.

The driver, Lewis Garcia, 24, was located a short distance away from the crash and was arrested and booked into the Graham County Jail on charges of DUI, criminal damage and leaving the scene of an accident.

According to a Safford Police report, an officer was dispatched to the intersection of 26th Street and 12th Avenue at about 9:17 p.m. regarding a single-vehicle collision.

Upon arrival, the officer located a black, 4-door sedan in a ditch at the intersection. The car apparently had plowed through a reflective caution sign before striking a cement bridge on the ditch. A large chunk of concrete from the bridge’s was seemingly broken off during the incident.

Garcia said the car was his brother-in-law’s vehicle and that it had been stolen. He denied being the driver. The officer noted Garica had watery, bloodshot eyes, a strong odor of alcohol on his breath and was hard to understand due to his slurred speech.

Garcia allegedly then acknowledged being the only person in the car during the crash but still denied being the driver. As the car was not a Tesla or other autonomous vehicle, the officer asked Garcia if he was the only one in the car and wasn’t driving if the car drove itself into the ditch, which Garcia replied, “it must have.”

The officer later spoke with the registered owner of the vehicle who said the car wasn’t stolen and that he had lent it to Garcia because he didn’t have a car to drive. The officer located a set of keys with a fob in Garcia’s pocket that locked and unlocked the vehicle’s doors. The keys were given to Magnum Towing, which removed the vehicle from the scene.

The officer reported being unable to conduct a field sobriety test on Garcia because the suspect’s unsteady balance while simply standing, and because Garcia allegedly was uncooperative and belligerent.

After being placed into the officer’s patrol vehicle, Garcia allegedly banged his head against the glass window to the point where he had to be removed and put into a patrol vehicle with bars protecting the windows.

While being booked at the jail, Garcia was given a portable breath test to see if he was sober enough to be admitted without having to be medically cleared. The test showed a breath-alcohol concentration of .100.

Garcia refused to submit to a blood draw for testing purposes, so the officer received a warrant to take the blood. The sample was taken without further incident and placed into storage for testing.