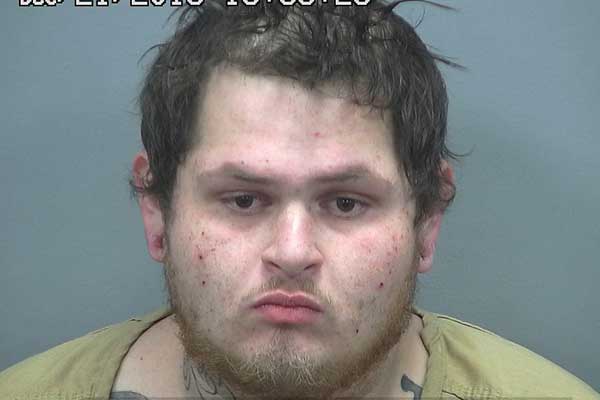 SAFFORD – Last Friday afternoon, an officer conducted a traffic stop of a vehicle that had apparently been involved in a recent shoplifting incident at Walmart. The officer made contact with the driver, identified as Niko Imrich, who was known through prior police contacts. The officer asked Imrich to step out of the vehicle and told him that he had been named as a possible suspect in the shoplifting case. Imrich replied that he had already taken care of everything from the last Walmart incident.

The officer asked Imrich to walk over to his police vehicle and as they walked Imrich told the officer that he had something on his belt loop. A large fixed blade knife was found on the backside of his waistband, woven into the belt loops. The officer removed the knife for safekeeping during their interaction. The officer had previously viewed still photos, which identified Imrich as a suspect in one or more shoplifting cases. Imrich told the officer that he had no idea what he was talking about in reference to the alleged incidents.

As the officer spoke with Imrich, his movements and speech were reportedly slow and lethargic, his skin appeared to be a pasty white in color. His had bloodshot, watery eyes along with pick or scratch marks on both sides of his face.

Another officer arrived and spoke with a male passenger who was reportedly hiding a tooder straw – a straw used to ingest drugs. When asked, Imrich admitted to the use of heroin, and reported the last time he used it was that morning between 9 or 9:30 am. The officers could smell the odor of burnt marijuana coming from the vehicle. A green plastic container was located in between the seats. The container had a used syringe, a silver eating spoon, which had a white residue in the bowl, and burnt black residue on the bottom. A lockbox was also located under the driver’s side seat. The name of the passenger was written on the box in black ink.

When the officer asked Imrich who the box belonged to, he said that it belonged to his passenger and he had placed it under his seat when they went to Walmart shortly before they had been stopped by the officer. The officer then spoke with the passenger, who then stated he had given the lockbox to Imrich months ago, and didn’t know what was inside. The officer spoke again with Imrich, who then claimed ownership of the box and stated there would be marijuana pipes inside along with syringes that belonged to him. Imrich provided authorities with the code to unlock the box.

A total of two multi-colored marijuana pipes were located inside. Both pipes had burned marijuana in he bowl. A total of seven unused syringes were located as well as a large silver spoon with residue. Two small plastic baggies with cotton inside and a small black zipper bag were also located. The zipper bag contained 21 small baggies that appeared to contain heroin The box had a vinegar smell, consistent with the odor of heroin. As Imrich was secured in the back of the police vehicle, he told authorities that he had more drugs in his hat. When his cap was removed, another baggie was found underneath. Imrich admitted that the baggies contained heroin. The passenger admitted that the green box was his and recited what was inside.

Imrich was transported to the Safford Police Department where they continued to interview him. Imrich admitted that he sells heroin, but was quick to say that he did not sell to children and didn’t work for another dealer. He told authorities that he had a total of 3.5 grams of heroin and that each baggie would sell for $20.00. Imrich allowed authorities to look at his phone, which had numerous messages involving drugs.

Imrich agreed to a blood draw but officers were unable to get a blood sample because of the number of track marks on Imrich’s arms. He was taken to Mount Graham Regional Medical Center, where they succeed drawing a blood sample after six attempts.