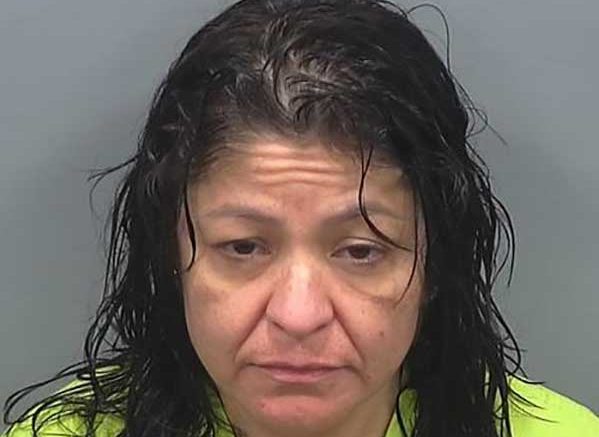 SAFFORD – In the early hours on Sunday, an officer in an unmarked patrol car observed a dark SUV driving on 5th Avenue with it’s lights off. When the vehicle stopped at a residence, a woman passenger got out and ran to the door of a residence in the area while the male driver stayed in the vehicle. When the officer came back around the corner he pulled up behind the SUV just as the woman came running back to the vehicle.

The officer asked the driver why he was driving without lights on to which he responded that he didn’t know. He said that he thought the lights were automatic. The officer then asked to speak with the woman who was identified as Michelle Kinnison. She reported that she was there to see a family member, whom the officer recognized to have had prior drug involvements. Kinnison was asked if she had just picked up drugs and she replied that she had not. As the officer continued to speak with Kinnison, however, she appeared nervous, looked around a lot and had trembling hands.  Police asked if she minded if they looked in her bag, she replied that she did mind but started to hand it to him but then pulled it back and said she didn’t want him to look.

The officer had spoken to the driver and Kinnison separately about their activities for the evening which didn’t seem to match up. When the officer mentioned this to Kinnison and how he felt there were drugs in her purse, she set it on the ground and began opening it while giving permission for the police to go through it. The officer informed Kinnison that he couldn’t see what was in there, so she retrieved the purse and and handed it to the officer, who placed it on the hood of the patrol car. Upon opening the purse, the officer discovered a case that contained a plastic bag. He asked what was in it, and Kinnison answered that it was paraphernalia powder. When the officer pressed for more information about the powder, Kinnison reportedly said that it was crystal methamphetamine.

Kinnison fidgeted with her hands and kept adjusting her jacket as the officer spoke with her so he asked if there was anything else illegal with her and she answered that there was not. While continuing to search the purse, the officer noticed Kinnison reaching in her clothing. He told her to not to be reaching, but observed that she had pulled a plastic bag out of her bra. The officer took the bag that had a white crystal like substance in it and placed Kinnison under arrest. Kinnison told authorities that a gram of meth was in the bag, she also reported that she had a pipe with her. When Kinnison was searched, several more bags with crystal substance, a cut straw with residue, a glass pipe, and a small glass vile containing a white crystal like substance were located in her clothing. Kinnison reported she forgot the items were there. The officer also found text messages indicating Kinnison was coming to pick up some marijuana. Kinnison was transported to jail and booked for possession of dangerous drugs and possession of drug paraphernalia.

After police finished speaking with the driver and nothing illegal was found on him or in the vehicle, he was released from the scene.