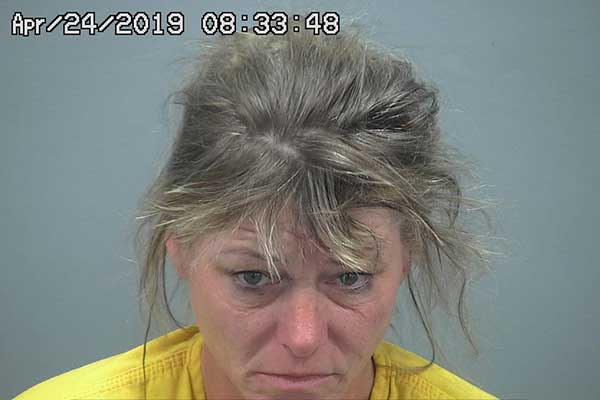 SAFFORD – Last Tuesday night around 11:45 pm, an officer discovered a van traveling in the 800 block on Highway 70 had suspended registration due to no insurance. A traffic stop was conducted and the vehicle pulled over in the parking lot of a bar located on Highway 70.

Jewell was told again to step out of the vehicle and was warned if she did not, she would be arrested for failure to comply with a police officer. Jewell stated the officer did not have the right to have her step out of the vehicle, so in return the officer reached through Jewell’s open window and attempted to open her door from the inside but Jewell rolled the window up. The officer could no longer hear of see what was happening inside the vehicle. The officer told Jewell to open the door or they were going to break the window. Jewell opened her door and got out. She was handcuffed and placed under arrest for failure to comply with the officer.

Authorities had asked Jewell and the passenger if there were any weapons in the vehicle, which they both reported there were not. But when the officers inventoried the vehicle before having it towed, two firearms were located: A Bersa .380 caliber pistol, Jewell later stated was hers, and the male passenger claimed the other pistol found.

Inside Jewell’s purse, police found a bag containing an electronic vape device and a metal smoking device containing a yellow waxy substance believed to be cannabis. A clear plastic container with green leafy substance believed to be marijuana was also found, and when asked, Jewell reported she did not have a medical marijuana card and indicated she had used marijuana in the last 24 hours.

Jewell was taken to the Safford Police Department where she agreed to a series of field sobriety tests. After having her blood drawn, Jewell was transported and booked into the Graham County Jail for Failure to comply with a police officer, Misconduct involving weapons, Possession of marijuana, Possession of drug paraphernalia.