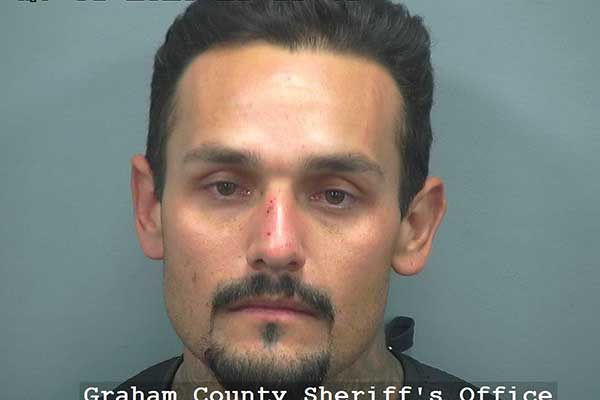 Safford police were dispatched to the area of 2nd Avenue and 16th Street last Thursday just after 7:00 pm in reference to an accident. The reporting parties said that a male subject had stuck a parked car and then fled the scene on foot. Witnesses were able to provide a detailed description of the suspect and the direction he ran. Authorities were able to produce a photo ID of the suspect based on witnesses description. When shown the photo of Richard Garcia, witnesses at the scene confirmed that Garcia was the driver of the vehicle from the ID photo.

The vehicle involved was registered to Garcia’s wife. Garcia was also wanted on a $25,000 felony warrant for aggravated assault and disorderly conduct.

Officers combed the area looking for Garcia. They spoke to several people in the area who witnessed Garcia going through yards and alleys. He also knocked on several doors in the area. Ultimately, authorities were directed to the area of Fargo and Stirrup Drive, where Garcia was apprehended and taken into custody.

In a press release, the Safford Police Department expressed gratitude for the citizens who were willing to help in times of need. “This is one of the many things that make our community safe and a great place to live,” The release said.