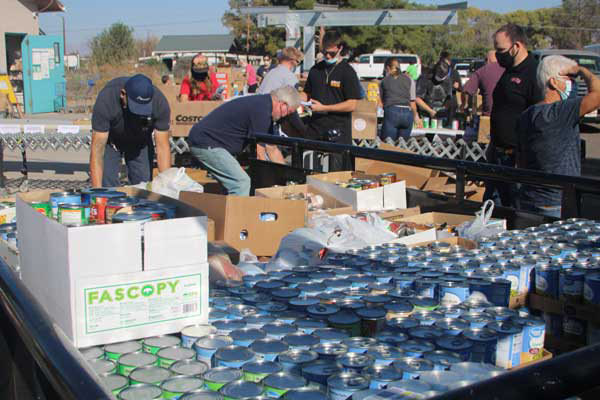 Volunteers help unload one of the many trailers filled with cans of food donated by area children in the Double R COmmunications Food Drive. - David Bell Photo/Gila Valley Central

SAFFORD — Families in need will have help this season, thanks to the Gila Valley’s school children.

The non-perishable food items donated during the annual Double R Communications Food Drive were delivered to Our Neighbor’s Farm and Pantry Thursday.

“This is what carries us through the entire year,” said Stacey Scarce, executive director for Our Neighbor’s Farm and Pantry.

“We do get other, small donations from people throughout the year. And that helps, of course,” she continued, “but normally this food drive would have to last us the whole year. And if we don’t get enough, it won’t last us.”

Last year almost 20,000 pounds of food was donated and this year, due to the ongoing pandemic, it appears the donations were coming in at about 50 percent.

The radio stations have been coordinating the food drive for more than 15 years.

“We want to help like we always do. Mack’s Auto is a big sponsor, Sparklight is a sponsor and Valley Furniture is a sponsor, and they jump in with us and it’s gotten big,” said Double R Communications owner Reed Richins during a recent appearance on Voice of the Valley. “I think we’re going to be alright. I think if we’re in the 20,000-item (range), then that’s 20,000 meals almost. And so we feel good about that.”

Dominos Pizza provided a pizza party, and Cakes with TLC provided cupcakes, for the class that collected the most cans in each elementary school in Graham County and in Duncan. And LifeNet Air Ambulance flew Richins to each school to present the winning classes with their prizes.

The winning classes were:

The donations from all the Duncan Elementary School classes will benefit the Duncan area food bank.