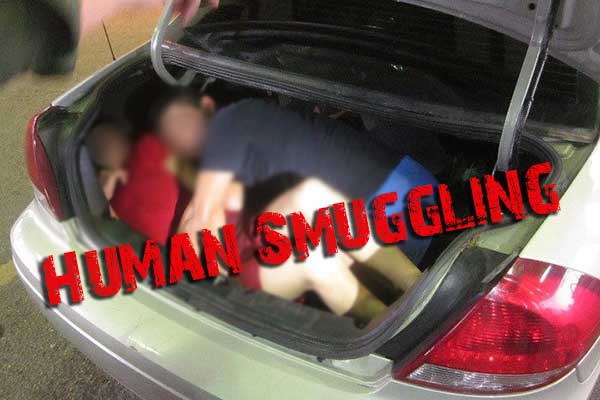 Tuesday afternoon, Nogales agents working at the Interstate 19 Immigration Checkpoint referred the driver of a GMC pickup for secondary inspection. During the search, agents learned the 16-year-old and 19 year-old passengers, both male Mexican nationals, were illegally present in the country. Agents arrested the 48-year-old U.S. citizen male driver for alien smuggling.

Wednesday morning, Willcox agents working at the State Highway 90 Immigration Checkpoint referred the driver of a Nissan Altima for secondary inspection after a canine alerted to an odor it was trained to detect. During inspection, agents found two Mexican nationals, ages 28 and 16, concealed in the trunk. Agents arrested the female driver and male passenger, both 21-year-old U.S. citizens.

Willcox Station Patrol Agent in Charge John Scanlon commented, “A human life is too valuable to be placed inside trunk or in the back of a truck like an object. This Willcox seizure demonstrates the lengths smugglers go to make money, and how little they care about the people they attempt to smuggle.”

Thursday morning, Sonoita agents utilizing surveillance technology witnessed two individuals being directed into the trunk of a Lexus sedan on Harshaw Road. Agents patrolling in the area initiated a traffic stop and discovered two Mexican nationals, ages 22 and 24, in the trunk. Agents arrested the 40-year-old male driver and 23-year-old female passenger.  Both are U.S. citizens.

The drivers and passengers from all three events are facing alien smuggling charges and will remain in custody pending a disposition in their cases. The six Mexican nationals will be processed for immigration violations.

Agents continue to warn that extreme temperatures can kill humans riding in the trunk of a car. Other dangers include carbon monoxide poisoning and the risk of serious injury or death from a vehicle collision.