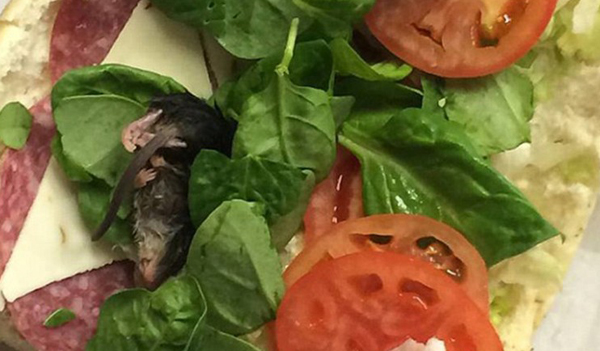 LINCOLN CITY, Ore. (AP) — A Subway customer says he found a dead mouse in a sandwich at a restaurant on the Oregon coast.

Matt Jones says spotting the mouse at the Lincoln City restaurant last week was the funniest thing he ever saw — and the most disgusting.

He tells Portland’s KGW-TV (http://is.gd/275jag ) his friend Jay ordered an Italian sub and wanted spinach. The employee scraped some from the bottom of a bin and plopped it on the bread. There was shock on both sides of the counter.

“I laughed because I was like, there is no way this just happened,” Jones said.

Cheryl Connell, director of Lincoln County Health and Human Services, said a health inspector quickly went to the restaurant. The investigator studied the dead rodent and the bin from which it came before searching the entire restaurant for any sign of contamination or droppings.

“The investigation determined that the rodent problem did not come from inside the facility,” Connell said. “It was probably in a bag of the bagged spinach product,” Connell said.

Subway declined to identify the spinach supplier, saying it is proprietary information. In a statement, the company said the restaurant was thoroughly cleaned and the customer given a refund.

Connell said health inspectors consulted with doctors and decided that, though unappetizing, the dead mouse was unlikely to have sickened anyone who had spinach from the same bag.