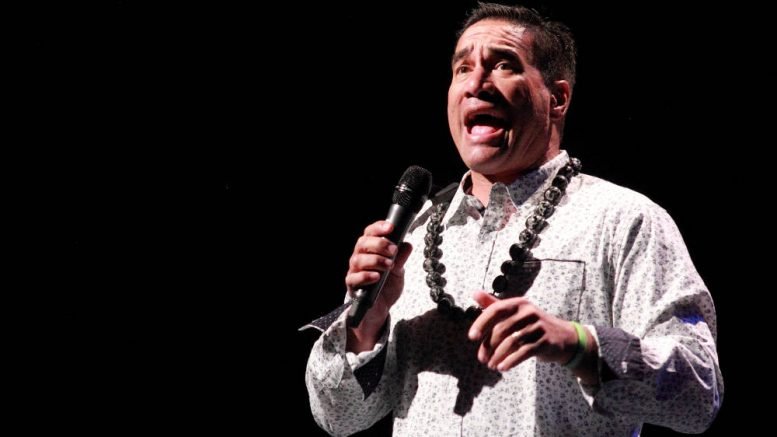 SAFFORD – With talent and Hawaiian charm, Darryn Kamae won first place and $1,000 in the 12th annual Gila Valley Idol competition (GVI) Thursday night. Kamae and 19 other competitors entertained a crowd and three judges at the David M. Player Center for the Arts, concluding months of singing from nearly 100 initial contestants.

Kamae sang his own original arrangement of “Me and Mrs. Jones” and also played the instruments on the backing track recording. Jillian Innes won second place, followed by Ashley Clement, Yasmine Boone, and Laurie Bolen in third, fourth, and fifth, respectively. Shayla Smith won the popularity contest on Facebook, receiving the most likes from her fans.

Although he says he has been playing music for years, Kamae was impressed and intimidated by his competition, making him nervous before the performance.

“I had heard a lot of the contestants sing in the auditions and also in the rehearsals, and I was really impressed at how talented they were,” he said. 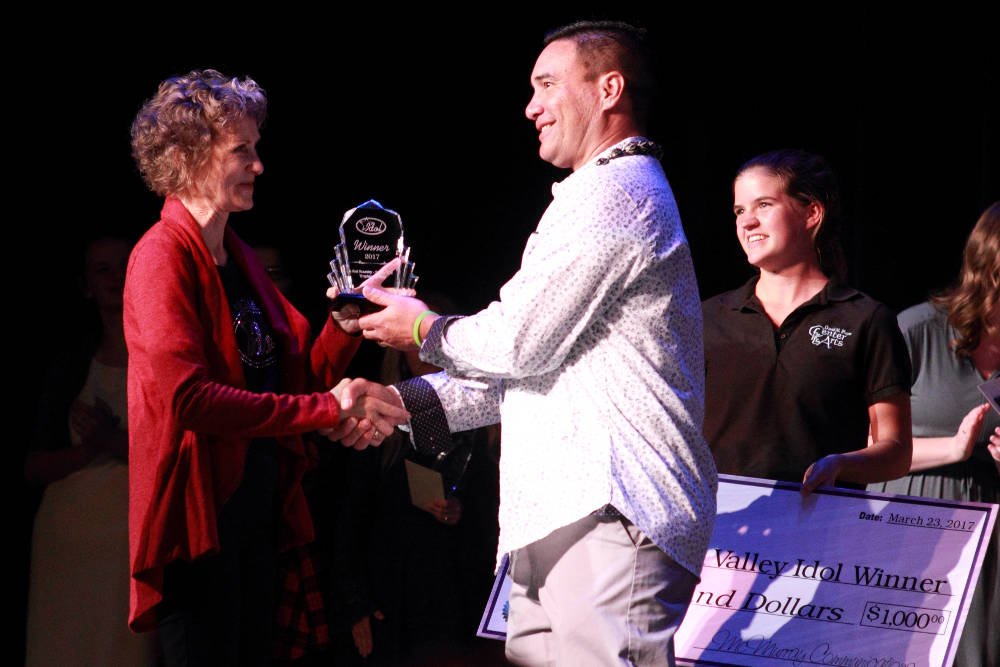 Bearing cut-outs of their favorite performer, Kamae’s fan club showed up in force.

“We moved here almost two years ago, and we’ve just kind of been adopted by some of our friends and neighbors,” Kamae said. “They’ve made friends with our kids and my wife and they’ve been great to us since we moved here.”

Kamae is part of the acoustic duo Our Island Style, and says being Hawaiian is a significant influence on his music. Much like his original performance at the GVI, his band combines pop hits from across the decades with a dash of island flavor.

“I love everything from Sinatra to Bob Marley and everything in between,” he said.

Our Island Style will be performing April 8-9 at the Safford Wine and Art Festival. 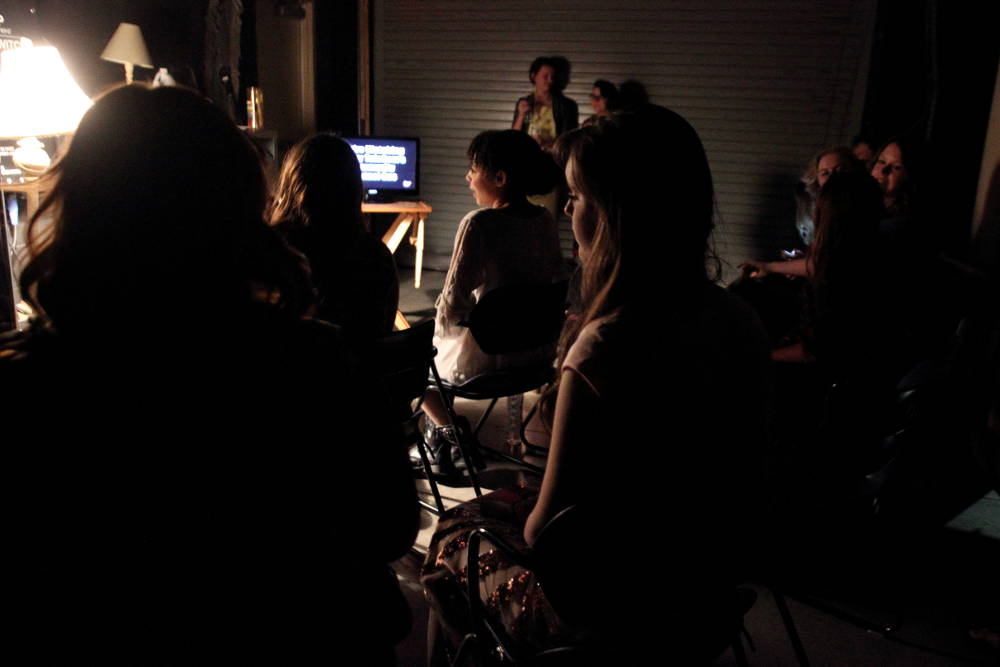 For the first time, this year the minimum age requirement was lowered to 15 years old. Judge and 2016 GVI winner Breanna DeRusha thinks that decision will raise the quality of future performances.

“What they really need is experience on the stage, so all those 15-year-olds that just performed now have a year under their belt for next year, which will just make our competitions better and better and better,” DeRusha said.

Reed Richins introduced second-place winner Innes, and told how she tried to compete for the first time when she was just 15 years old, turning 16 a few days after the finals, but was too young to meet the requirement. Now, she’s 22, about to turn 23, and the audience sang “Happy Birthday” to her before she performed. 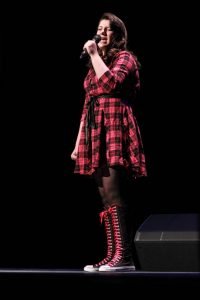 Eric Burk Photo/Gila Valley Central: Rachel Clark was one of several 15-year-olds to take advantage of the lowered age to enter the Gila Valley Idol.

Most of the contestants were in their teens, with several 15-year-olds taking advantage of the opportunity to perform. Rachel Clark was one of them, wearing all pink to sing a song originally performed by Pink. Although she did not win, Clark said she has received plenty of compliments, and is proud of her performance. She was rooting for Kamae to win, so that she can come back as a contestant next year.

“I want to perform more,” she said. “Why would I miss that?”

Her advice to herself for next year?

“Don’t screw up and have more fun with it,” she said.

Davis Nathan and 2008 GVI winner Adam Crohn were the other two judges. Nathan has seen 12 years of the GVI.

“I would say, top to bottom, this might be the strongest year we’ve ever had,” he said.

Nathan is also the general manager at McMurray Communications, the business that runs the GVI, along with local sponsors. Nathan says the competition is important to showcase what he calls “a surprising amount of talent for a community this size.”

He says that solid music education at local grade schools and at Eastern Arizona College, combined with experience singing in church, give kids the skills to excel vocally. Nathan’s advice to competitors is to take voice lessons and develop their showmanship.

Since some contestants did not hold their microphones close enough, the judges missed out on hearing those contestants to their best advantage, DeRusha said. She likes upbeat songs since they stand out in competition and said pitch control is essential to be in the top five.

Although one judge initially wanted Kamae for second place, the judges all agreed that he was in the top two, according to DeRusha. She says they worked hard to avoid contention over a field full of talented performers. 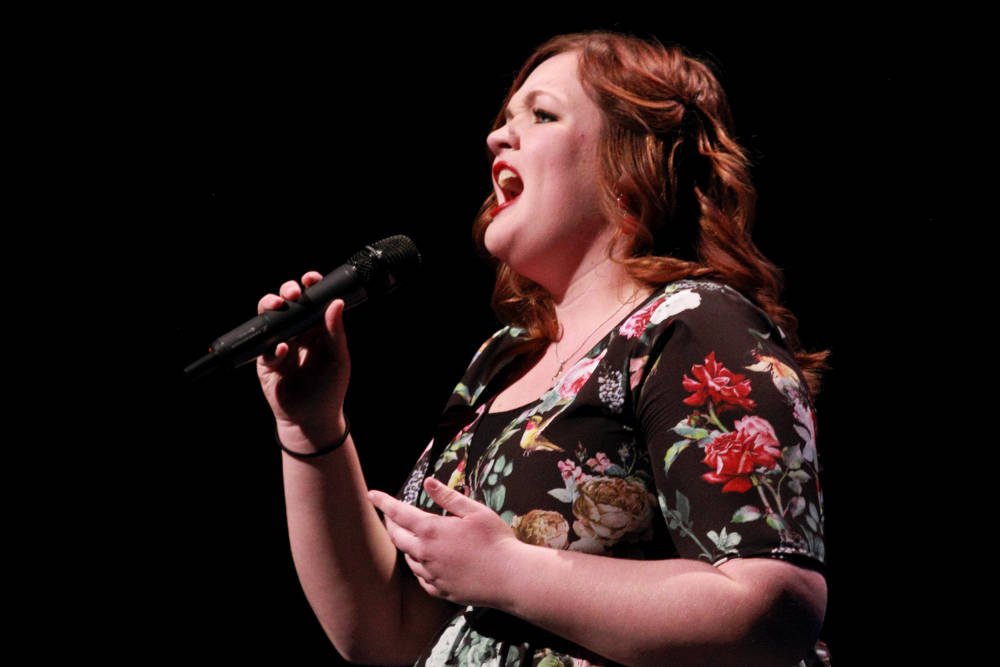 First time GVI attendee Cynthia Thompson was impressed with the talent. She said her favorite was 20-year-old Hope Kelleher, who demonstrated remarkable vocal power in her performance of  “Stone Cold.”

“I really liked (Kelleher), I thought she was amazing, and I enjoyed the winner, (Kamae),” Thompson said. “That was a great performance all around. His voice was amazing, just perfect pitch, and I think his stage presence really took him over the top.” 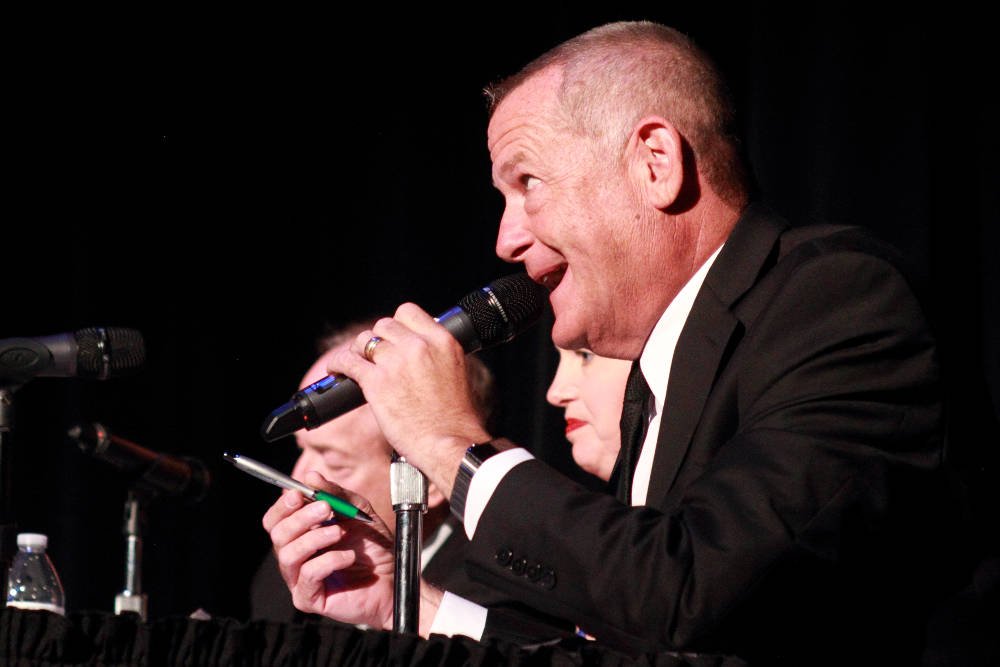 Kamae advises future competitors to find a song within their vocal range.

“The easiest way to do it is find an artist that you can comfortably sing along to, and the biggest thing is to have fun doing it,” he said.