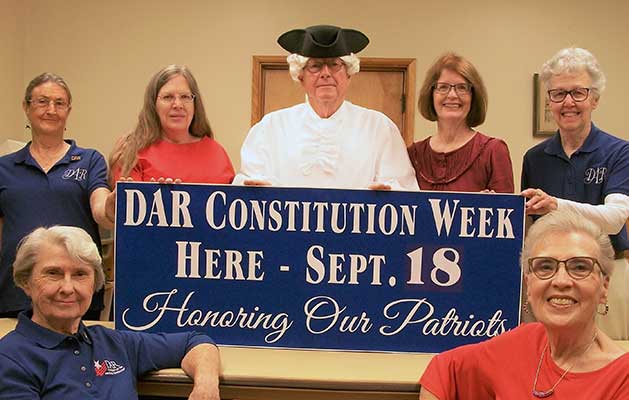 For the second year, members of the Daughters of the American Revolution in the Gila Valley Chapter will honor patriots in their family lines by sharing stories of courage and sacrifice. DAR member, Helen Masten, will tell of events in the lives of her 4th great grandparents (Thomas & Dicey Langston Springfield), who both served as devoted patriots, one in the South Carolina militia and the other in the same area as a young spy. This talk will be followed by two sisters, Renee Smith Durfee and Talana Smith Hooper, who will share stories of their 4th great grandparent patriots (Henry & Mary Burks Smith) as they moved from Virginia to the Fort Jefferson area in Kentucky to deal with the Indian raids encouraged by the British.

Since it is common to think of revolutionary patriots as mainly being soldiers, John Hancock, portrayed by John Ratje, will be present to tell about the dedicated efforts of one of his colleagues in the Continental Congress, Charles Thomson. A man who did a great deal during the revolution but was not widely recognized.

This program will also include the current generation by honoring high school winners of the DAR Patriotic Essay Contest. These students will share their patriotic values as they read their essays and answer questions from the audience.

Adding to this patriotic occasion will be Gary Burnett, widely known as “Mr. Constitution,” who is an actual relative of George Washington and a devoted supporter of our nation’s Constitution. Gary will have his latest book, Why These United States of America Came To Be One Nation Under God, available for purchasing as well as free Constitution booklets to hand out.

This event, co-hosted by Friends of the Library and DAR, will take place during Constitution Week on Wednesday (Sep 18) 5:30 – 7:00 PM at the Safford City-Graham County Library. All are invited to attend; admission is free. Refreshments, with a patriotic flair and revolutionary flavor, will be served.