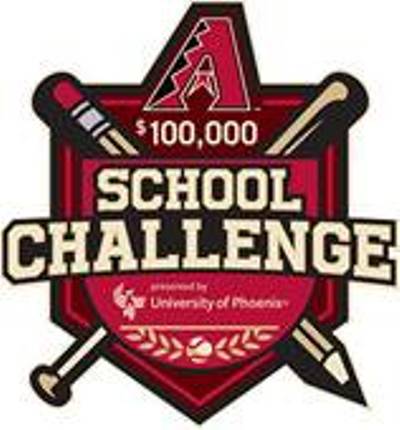 PHOENIX – The Arizona Diamondbacks Foundation is now accepting applications for the $100,000 School Challenge, presented by University of Phoenix, to benefit schools across the state of Arizona. The program is open to all Arizona public, private, and nonprofit charter schools, Grades K-12, and teachers and administrators are encouraged to “make their best pitch” on why they deserve to receive this important funding by submitting an application online at dbacks.com/schoolchallenge by Sept. 27.

The D-backs kicked off the program in the spring of 2012 with the $100,000 School Challenge and received an overwhelming response that inspired the team to continue the program annually. With more than 3,800 applications over the past seven seasons, the Arizona Diamondbacks Foundation has been able to help more than 200 schools for a grand total of $950,000 since the program began. The Arizona Diamondbacks Foundation and University of Phoenix provide a combined $100,000 for the program. The grants, which range up to $5,000, have helped schools from across the state with innovative programs to satisfy an array of needs, ranging from an all-inclusive playground to a flight simulation program and a school garden to an electronic response system.

The School Challenge is part of the D-backs’ overall charitable efforts and the team and its charitable arm, the Arizona Diamondbacks Foundation, has contributed more than $61 million in combined donations since its inception in 1998, including more than $6 million in 2018.