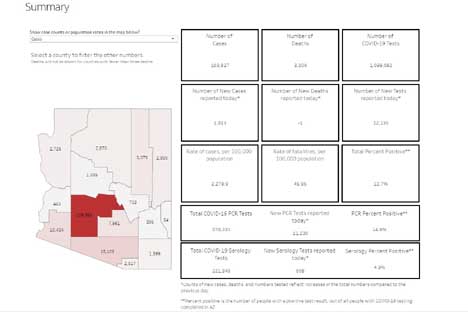 SAFFORD — A sixth Graham County resident has died as a result of COVID-19.

Graham County Health Department announced the death Saturday, stating the victim was over 65 years old and a member of the San Carlos Apache tribe. It’s the second coronavirus-related death in Graham County over an eight-day period.

The San Carlos Apache Tribe also added a significant number of new positive cases to its total, with 64 new cases over the weekend — 28 Friday, 23 Saturday and 13 Sunday. That brings the tribe’s total to 424, with 164 active, 232 recovered and seven deaths.