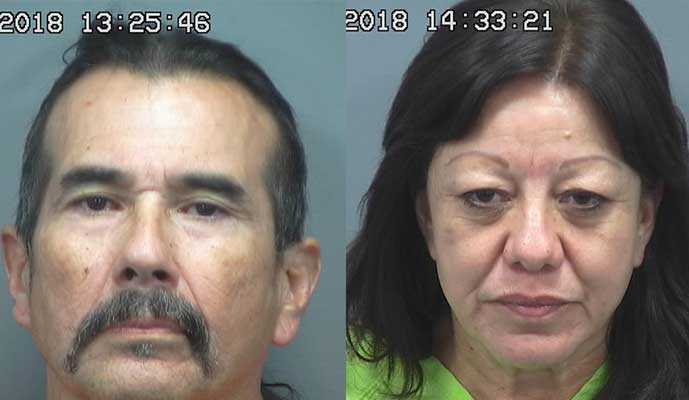 SAFFORD –  Saturday night Safford police observed a truck driving in the area of 8th Avenue and 8th Street driven by a man known to authorities as Steven Fernandez, who police recalled had his driver’s license revoked. When the officer turned around to approach the rear of the vehicle, they could hear the engine accelerate loudly and could visually see it accelerating at a high rate of speed. The police activated their emergency lights and notified dispatch of the vehicle’s location of acceleration.

The vehicle came to a stop at the shoulder of the road at the intersection of 8th Avenue and 11th Street. When the officer began approaching the truck, Steven got out of the truck and while doing so, a piece of tin foil and a cut red straw fell from the driver’s open door. The officer recognized it as drug paraphernalia and placed his boot on it to prevent it from blowing away. The officer informed Steven, he was under arrest for possession of drug paraphernalia. Steven proceeded to be passive resistant by tensing his arms and pressing against the officer as they placed him in handcuffs. The female passenger, identified as Janette Fernandez, started to get out of the truck. The officer told her several times to remain seated in the vehicle but she would not comply. When another officer arrived on the scene Janette became more compliant, seating herself in the passenger seat.

According to the police report, Steven stated several times that the paraphernalia was not his while dispatch was confirming that his driver’s license status was indeed revoked. Authorities recovered from Steven’s pocket a large bundle of cash, totaling$3,436.00

Meanwhile, when the other officer was speaking with Janette, Steven shouted “La puerta, La puerta,” that an officer knew in Spanish meant “the door”. Janette was removed from the vehicle, and on the inside of the driver’s side door several cut straws with burnt ends and residue were recovered, along with a pill bottle containing a black tar substance recognized to be heroin that looked to be more than one gram and exceeding the amount for personal use.  A white crystalline substance recognized as methamphetamine appeared to be a usable amount but within the threshold for personal use was also found. When Steven was shown the items recovered, he denied ownership of them and stated he allowed another man to borrow the vehicle the day prior.

When Janette was asked if the items belonged to her, she said they did not. She gave permission for the police to search her purse after telling them she did not have anything illegal in it. Authorities discovered in a canvas bag inside the purse, a tin container which contained methamphetamine. She denied ownership and then said she no longer wanted to speak with the police. She was placed in handcuffs and secured in a patrol vehicle.

As officers continued searching the vehicle, additional separate and individually packaged amount of heroin were found in the driver’s side door. Inside of a coffee cup on the center console, authorities recovered a rolled piece of tin foil with burn marks and a usable amount of heroin still inside of the foil. It appeared to the police that the couple attempted to destroy or conceal the item by placing it into the coffee cup which still contained an amount of liquid coffee.

Janette and Steven were transported to the Graham County Jail.