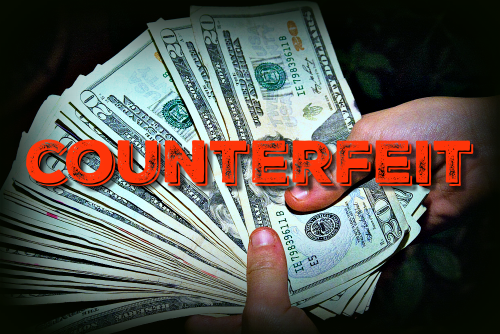 A rash of counterfeit bills have recently been reported in the Gila Valley.

GRAHAM COUNTY – Authorities are warning the public to be vigilant when dealing with money as counterfeit cash has been reported throughout the Gila Valley recently.

While most of the money has been counterfeit $20 bills, police have also confiscated other phony bills, including denominations as low as $1.

On Sunday, a Safford officer was dispatched at 4:36 p.m. to the Giant gas station at 300 E. U.S. Highway 70 regarding two women who attempted to purchase cigarettes with two counterfeit $20 bills. Thatcher officers responded to a similar complaint earlier in the day at Doc’s Food Store at 2371 W. U.S. Highway 70, where counterfeit money was used. There had also been various other reports from citizens and merchants earlier in the week, including one instance where a customer was given a counterfeit $20 as part of her change while shopping at Walmart at 755 S. 20th Ave. In that instance, Walmart exchanged the counterfeit bill with a real one and officers confiscated the phony bill.

In the Giant gas station case, the clerk described the women who attempted to pass the fake bills and said they walked back across the street to the Economy Inn at 255 E. U.S. Highway 70.

The officer gave the description of the suspects to the hotel clerk, who then guided him to the room the suspects rented.

Upon questioning, the women handed over the two counterfeit $20 bills and said they, in turn, had received them from a white male. The male was described as being in his 30’s and roughly 6 feet tall with an average build. The women said they were drinking alcohol and smoking marijuana, and the money the man gave them was payment for money they loaned him earlier that night. During the interaction with the women, the officer confiscated a small bag of marijuana.

The counterfeit bills and marijuana were placed into evidence, and the case was forwarded to Safford detectives.