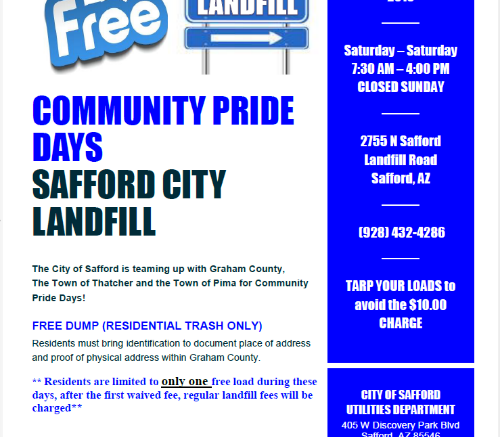 With Community Pride Days coming up on April 9th-April 16th, people are readying for yard work and perhaps eyeing their trash sitting dejectedly in the sun. Although few would like to admit it, taking the trash to the dump can be a costly and time consuming chore left neglected. Some might eye the trash and simply take it out to the desert, leaving their trash out of sight and out of mind. However, what they don’t understand is that even though you might not see it, illegal dumping is still a major problem in the Gila Valley. Not only that, but it’s time to start cleaning it up.

Jay Rasco of SEACAB and Laura Rogers from the Graham County Health Department, along with many others in the community, have banded together to start cleaning up the mess. “We did a community health assessment almost 4 years ago,” Rodgers stated, “While we were doing that process I met with different neighborhoods throughout the county to find out what people felt about where they lived. One of the common things was that they wanted to clean up. They wanted their neighborhoods cleaned and they wanted to help people that didn’t have the means to get their junk out of their yards.”  The people of the Gila Valley have spoken, and they said that it is time. It’s time to clean up, it’s time to start recycling, and it’s time to start taking accountability for our surroundings.

Whenever you think about tossing a McDonald’s cup from your car, consider the consequences of your actions. “I’ve done a lot of research on people’s litter habits,” Laura Rodgers said, “The biggest takeaway that I got from that is that litter begets litter. If there’s a piece of litter, then the next person who sees that thinks that it’s okay to litter and they are going to litter also.” If the view outside your window isn’t enough to want you to change your litter habits, think about your pocket book. According to a recent study by Keep America Beautiful, littering has cost the American populace an average of $11.5 billion dollars every year.

Not only is cleanup vital, but so is basic recycling. What many people might not know is that the local landfill is reaching the end of its life expectancy. “If we have to replace that landfill, the cost will be 58 million dollars,” Jay Rasco stated, “And all of us will have to pay for that.” Now more than ever, we as a community need to start recycling our waste products. “The city has promoted the recycling and has already reduced the input to the landfill by 19 percent,” Rasco said, “And that’s just the city of Safford.”

With the arrival of Community Pride Days, those who have trash in their back yard are getting ready to get rid of it. Although this approach is helpful, it is still not productive enough. “We can band together,” Rodgers stated, “Help each other in your own neighborhoods instead of just waiting for us to bring the roll off container again.” Now that the community sees that things need to change, it’s time to work together.  “The key is working together and communication,” Rasco said, “Most people don’t know about all of this stuff.”

If you want to help the effort to clean up our valley but you feel you don’t have the time, donations are always accepted. If you have a few hours in your day, you can always email Jay Rasco at jyrasco1936@gmail.com to see what you can do to help.  If email is too slow of an approach, you can also call Laura Rogers at the health Department at (928)-792-5368.