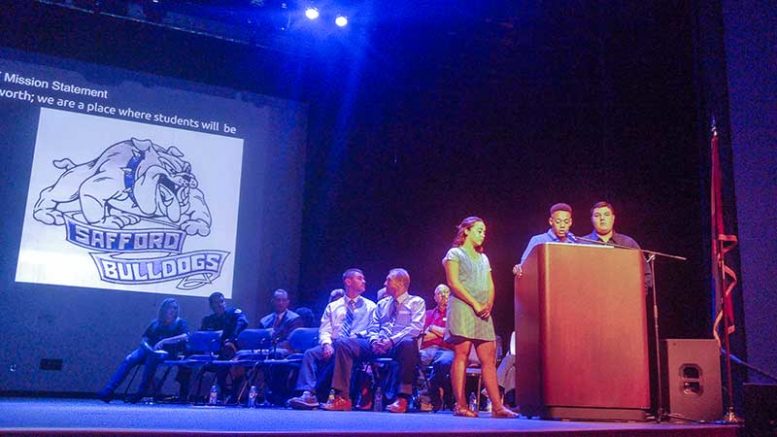 Brooke Curley Photo/Gila Valley Central: It was the speech by these three students, from left, Aaliayah Armijo, Lazaro Lombillo, and Chris Lujan, that roused the crowd to a standing ovation at a suicide prevention meeting Monday night.

At the David M. Player Safford Center for the Arts, the Safford Unified School District began the community meeting with the National Anthem, an introduction to the influential guests on the stage, followed by a video and the multiple key speakers.

Ken VanWinkle, Safford Schools Superintendent, first addressed the large crowd and spoke of the 2016 hail storm that occurred nearly a year ago, and the now evident suicide crisis. Drawing a comparison between the storm and the suicide crisis, VanWinkle encouraged the community to come together as if dealing with the aftermath of a natural disaster.

“We’ve been faced with serious tragedies,” VanWinkle said. “Simply doing nothing is not an option.”

After VanWinkle’s comments, Safford Police Chief Joe Brugman took the stand and addressed the community. Brugman told the audience that he loved the spirit of the Gila Valley community and that he takes each loss of life from suicide very personally. Brugman observed that individuals in the community are so wrapped up in the here and now, that the future is seemingly nonexistent. However, Brugman urged those attending to cultivate a community of acceptance, tolerance, and understanding for those who may be going through mental and physical difficulties. Also, Brugman stressed parent and child communication. 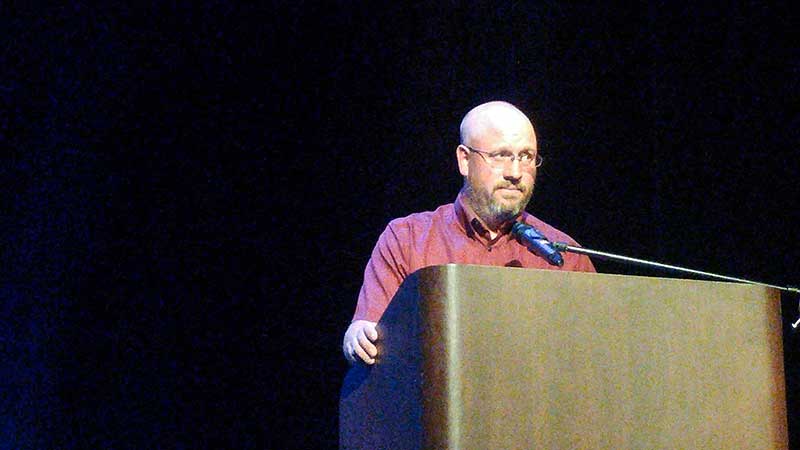 Brooke Curley Photo/Gila Valley Central: Safford teacher and parent Lance Fite speaks at the event about the challenges teenagers are facing today, as well as the ever-present situation of social media.

Brugman’s talk was followed by a speech by Safford school teacher and parent, Lance Fite, who told the crowd that the youth of today live in a world that is vastly different from the previous generations. Fite reminisced about living in a house where he had to speak to his girlfriend on a rotary phone. Now, however, Fite said that today’s youth must make adult life-and-death decisions. Fite also spoke of a local youth who had been on the phone late at night with a friend, and while in communication learned that the friend was suicidal. Without speaking to parents or anyone else, that child called 9-1-1. Fite also brought it to the attention of the crowd that the school is not solely to blame for the suicides within the community, but stressed action nevertheless.

“We’re here to do something about it,” he said. “We all make up the community. These issues are not solely school issues. We’re a community, and these are community issues.”

Fite also advised the crowd to ask themselves what they might do within the community to turn the tide of an ongoing epidemic. Each individual attending the meeting was given a card and asked to write something on it that they would be willing to do to make a change for good. Fite also encouraged parents to step into and know the deeper aspects of their children’s lives.

“What’s my part? We should say this to ourselves when we look in the mirror,” Fite said. “We owe it to them to know what’s going on in our children’s lives.” 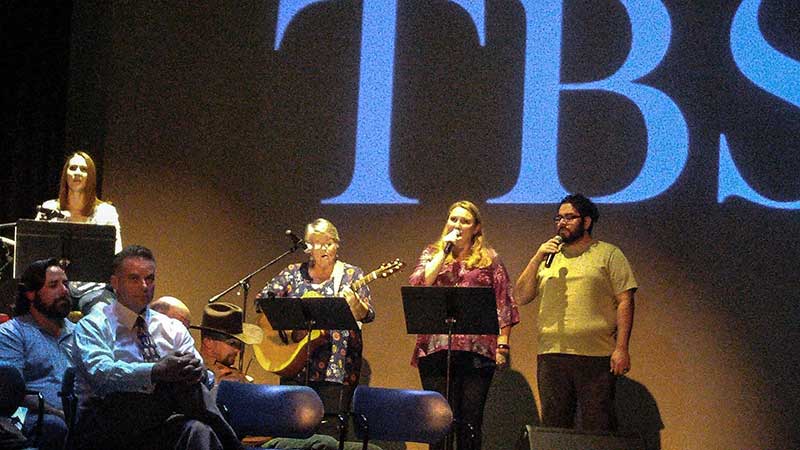 Later, Fite challenged those attending to see something, say something, and do something when faced with the possibility of positive change. Following Fite’s comments, multiple speakers and a special number ensued. However, it was the speech by three students at the end of the program that roused the crowd to a standing ovation.

Aaliayah (Alia) Armijo, Lazaro Lombillo, and Chris Lujan, are all students at Safford High School. Having worked together for many hours on their presentation, the trio read their speech to the crowd. Together, they asked the audience to step up within the community and even within their own families. Parents were asked to be examples to their children, and students were asked to stop making destructive decisions that pertained to social media and personal care. Lastly, Lombillo addressed the crowd as a family member of two victims of suicide.

“After the long nights of tears, I knew there was only one thing I could do,” she said. “Take the right turn on the trail (and) be there for the ones that needed me. Show strength in times of weakness, and comfort those who don’t yet have the will or power to be there for themselves. Show grit when it comes to family. This doesn’t mean show love or care for a week or care for a year. It means to show love day in and day out before time’s run out. If you see something, say something, do something.”

Those in need to speak with a counselor or just someone to listen can text “TEEN” to 839863 to speak with someone. During school hours the number is run by counselors who oversee teens who answer the calls. The Suicide Prevention Textline is 741741

Cameras to be installed in Firth Park and skate park