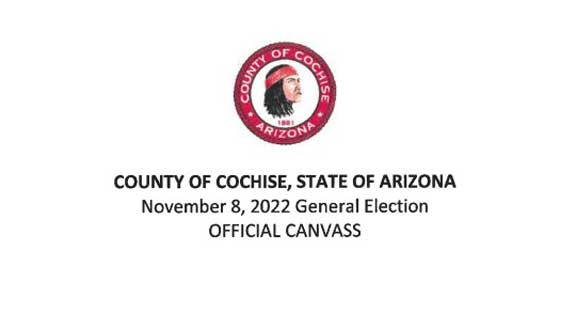 BISBEE — The results in some of the races in Arizona’s 2022 general election have been thrown into doubt thanks to the Cochise County Board of Supervisors.

During a special meeting Monday, the board voted 2-to-1 to delay the certification of the county’s vote until Friday, Dec. 2.

“The politically liberal viewpoint that may prevail on Melody Lane does not prevail in this county,” said Supervisor Tom Crosby, R-Dist. 1.

Cochise County offices are located on Melody Lane in Bisbee.

The deadline for counties to certify the election results is Monday, Nov. 28. Sophie Solis, deputy Communications director for the Arizona Secretary of State’s Office, issued the following statement in response to the Cochise County Board of Supervisors’ vote.

“The Secretary of State will fulfill her statutory responsibility to canvass the 2022 General Election. Arizona voters should know that when they cast their ballot, the Secretary of State will do everything in her power to make sure their vote is counted and their voice is heard. That is our office’s duty under state and federal law. If a county hasn’t certified the county’s results by the Secretary’s deadline to certify state results, she will have no choice but to proceed with certification in accordance with the law.”

Crosby moved to delay the certification process to allow Paul Rice, Michael Schaffer, Daniel Wood, Brian Stein, Daniel LeChance and one other man up to 12 minutes each to make claims questioning the certification of the machines used in the election. The motion gives an equal amount of time to the Secretary of State’s office.

After that presentation, both sides will be given another 30 minutes.

Kori Lorick, the state elections director in the Secretary of State’s Office, previously informed the Cochise board that the machines in all 15 counties have been both federally and state certified, as well as tested.

Since 2020, there have been multiple challenges to the voting machine certification by some of the men named by Crosby, but each case has been rejected by the state’s Supreme Court.

If Cochise County’s votes are not included in the state’s final tally, it would flip the results of the race for Congress in District 6, which includes parts of Cochise, Graham, Greenlee and Pima counties. Republican Juan Ciscomani is currently leading Democrat Kirsten Engel by 5,232 votes.

It could also change the results in the race for Arizona Superintendent of Public Instruction, as well as widen the lead by Democrat Kris Mayes over Republican Abe Hamadeh in the race for state Attorney General, taking the latter race out of the range for an automatic recount.