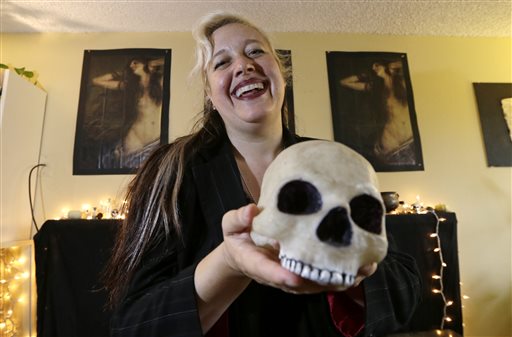 Lilith Starr, chapter head of The Satanic Temple of Seattle, holds a plastic skull while being photographed in her home Wednesday, Oct. 28, 2015, in Seattle. At the invitation of the Bremerton High School senior class president, Starr says that her group of self-described Satanists will attend the school's football game Thursday to protest a decision by a Christian coach to continue praying at the 50-yard line after games. (AP Photo/Elaine Thompson)

SEATTLE (AP) — A football field in Washington state has become more than a battleground for athletes as the suspension of an assistant coach for praying at midfield after games divided people around the country over the religious rights of school employees.

District officials put Joe Kennedy, Bremerton High School’s assistant football coach, on paid administrative leave because he ignored orders to stop overt religious displays on the field. Citing past Supreme Court and appeals court cases, officials said they did not want to be seen as endorsing religion.

“While attending games may be voluntary for most students, students required to be present by virtue of their participation in football or cheerleading will necessarily suffer a degree of coercion to participate in religious activity when their coaches lead or endorse it,” Bremerton School District said.

As expected, Kennedy attended Thursday’s game, hugging players over a fence, and after the game, kneeling down and praying with a group of people in front of the bleachers.

Kennedy told media it hurts his heart to be on this side of the fence while his guys are in the locker room. He also said he’s willing to take this “as far as it goes and by doing so says he’s teaching his players “if you believe in something you stand up.”

The senior class president was among some students and teachers who pressed for the district to clarify its policy on religion. Abe Bartlett said he was one of those who invited a group of self-described Satanists to attend the Thursday night game in a push for answers.

“The main reason I did it is to portray to the school district that I think we should either have a policy that we’re not going to have any religious affiliation or public religious practices, or they should say people are going to be allowed to practice their religion publicly whatever their beliefs,” the 17-year-old said Wednesday.

“They need to either go black or white,” Bartlett said, noting that the issue has become a topic of discussion in his government class. “I don’t think this controversial middle ground is what our school needs.”

Meanwhile, supporters filled Kennedy’s Facebook page, verified by his attorney Hiram Sasser, with messages. His profile picture showed a group of people in “Praying Coach” shirts, and he posted a message urging people to “forget me and come support these incredible young men” playing Thursday.

Kennedy has prayed before and after games, sometimes joined by students, since 2008, but the district asked him to stop when the practice recently came to its attention.

He initially agreed, but then, with support from the Texas-based Liberty Institute, a religious-freedom organization, he resumed the postgame prayers, silently taking a knee for 15 to 20 seconds at midfield after shaking hands with the opposing coaches.

His lawyers insist he is not leading students in prayer, just praying himself. Dozens of lawmakers in the Congressional Prayer Caucus sent a letter this week to the superintendent expressing support for the coach.

Sasser said the decision to put his client on leave was shocking. He said they plan to file a charge of discrimination with the Equal Employment Opportunity Commission, a step that could lead to a lawsuit.

Members of the Satanic Temple of Seattle clad in robes also briefly went to the game, with one woman sporting ram’s horns on her head, to support the teachers and students who invited them.

There were a few tense moments as some students jeered at the group, banging on the fence and throwing liquid, according to The Seattle Times.

The organization said the district created a forum for religious expression open to all groups by allowing the coach to continue praying and cheered the decision to put Kennedy on leave.