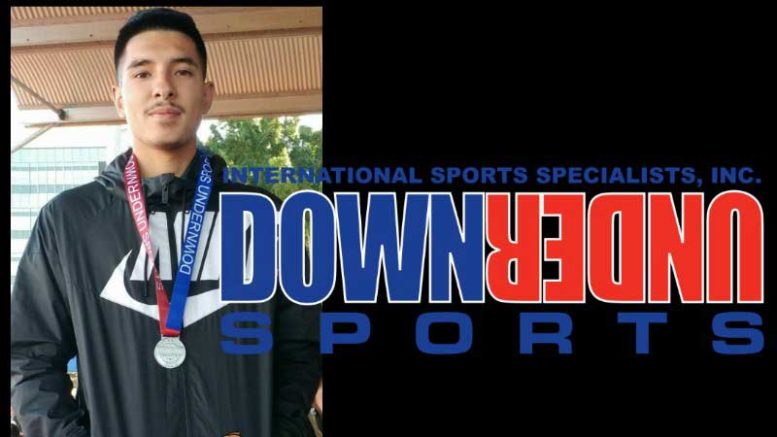 Clifton resident Hector Morales made it to Australia to participate in the Down Under Games, winning a silver medal.

CLIFTON- A teenager with big dreams, Hector aimed for Australia and made it.

Hector Morales, a 19- year old Morenci High School graduate, was invited to represent Arizona in the 2017 Arizona Pacific Conference Track and Field team in Australia. Morales graduated in May and was excited about the opportunity to participate in the international competition. With the support of his mother, friends, and family, Morales was able to raise $5,000 to travel internationally. With excitement and only a little trepidation, Hector and his mother, Cathy Jaramillo departed for Queensland, Australia on Monday, July 3.

Not only did Morales participate in the event, but he excelled in it. Running the 1500 meter dash, Morales ran faster than ever before with a time of 4:57.51. This performance won him and the Arizona team a silver medal.

Morales told Gila Valley Central that competing felt different because he didn’t know anyone on the competing teams. Nevertheless, Morales said that even though it was odd to not know anyone, he enjoyed meeting new individuals and watching the competition as a whole.

“Until we were standing in line to pick up our keys to the apartments they roomed us in. They called us out by our last names the lady called out the last name Mathis and I remembered the name from a track meet in ran in Florence,” Morales said. “Meeting new people and watching all the competition. It was slow paced because of all the age groups (and) it was not an ordinary meet.”

Later Morales said that the most difficult aspect of the entire event was that he didn’t know who he was competing against.

“The hard part not knowing what I was up against,” Morales said. “It felt weird, because of the fact of not knowing anyone I was going to run against.”

Cathy Jaramillo told Gila Valley Central that she was able to travel with her son and that watching him compete was an amazing experience. Jaramillo also said that it was amazed at the teamwork of her coworkers and family in raising the needed money for the trip.

“It was a great time with my son,” Jaramillo said. “And it was amazing how my co-workers took part in the fund raising.”

Aside from the money donated by family and friends, Jaramillo raised the necessary funds by appealing to the one thing everyone wants: Good food! Jaramillo sold roughly 200 burritos every Wednesday. Gila Valley Central did the math and found that Jaramillo and her family sold roughly 4,000 burritos. As a family, Jaramillo and her kids would stay up to midnight to cooking burritos to sell the next day. Because Jaramillo had to work early in the morning, she would only be able to sleep for about two to three hours on those long nights.

Through all the work, raffles, and walking door to door, Jaramillo told Gila Valley Central that the best part of the entire experience was to see the runners come together as a team.

“The best part was watching all the kids just come together like they were already a team,” Jaramillo said. “All the Wednesday nights of only 2 hours of sleep was definitely worth it.”

After the competition, Morales and Jaramillo were both given the chance to visit local Austrailian beaches and animal sanctuaries. Morales was able to hold a koala, and he named her Jenny after the character from the movie Forrest Gump.

A teenager with big dreams, Morales wants to eventually join the Army, go to college and learn the trade of being a barber to pay for the cost of college. Morales’ hobbies include riding his longboard and going to the gym. He also enjoys visiting his grandfather, who is a Safford resident, and looking after his nieces and nephews.

What is Down Under Sports?

“…to use the common language of sports to bridge the continents.” – George O’Scanlon, International Sports Spcialists Inc. President

International Sports Specialists, Inc. (ISSI) was founded in February 1989, based upon the dream of a New Zealander by the name of George O’Scanlon. George fell in love with athletics, especially American football as a young man growing up in his native country of New Zealand. His desire over the years has been to promote gridiron, not only to the people of New Zealand but also to Australia where he lived for many years. For over twenty years, ISSI has had the opportunity to share the land Down Under with tens of thousands of individuals from across the United States. The overwhelming success of the Down Under Bowl was a springboard for ISSI’s establishment of the Down Under Hoops Classic and eventually the Down Under International Games. From its first Down Under Bowl in 1989, when four states produced a handful of teams, to 2015 when ISSI sent athletes from almost all 50 states to compete in the Down Under Bowl, Hoops Classic and International Games, the goal has been the same; to use the common language of sports to bridge the continents.

The number of athletes desiring to participate in these events has continued to grow each year and ISSI anticipates further expansion. Some prior standouts of the Down Under Bowl include Jake “The Snake” Plummer past quarterback for Arizona State University and the Denver Broncos, and Ahman Green, running back for the Houston Texans. Many top universities also have Down Under Bowl Alumni.

ISSI hosts the annual Down Under Sports Tournaments which provide a forum for athletes from other countries to compete head-to-head in the sport they love. The Down Under Sports Tournaments have included competition in football, cheerleading, basketball, volleyball, golf, cross-country, track and field, free style wrestling and swimming. ISSI’s goal is to continue to provide athletes who excel in their sport the opportunity to experience the culture, beauty, and grandeur of the land Down Under all within the framework of spirited and intense competition in many different sports.