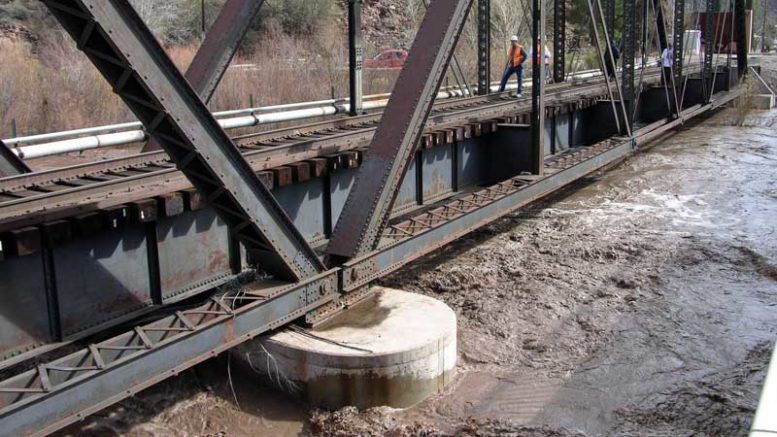 File Photo By Gualterio Casias: Local workers stand on the Southern Pacific Railroad bridge as the San Francisco River in Clifton approaches flood stage in May 2001. The flood waters licked the bottom of the Coronado Bridge (not pictured) that spans U.S. 191. It was many of several close calls that have occurred since the devastating flood of 1983. At present, town of Clifton officials are noting that the rainy season is approaching and are preparing for the possibility of flooding. The San Francisco River is one of the eight fastest running rivers in North America, according to the U.S. Geological survey.

Sirens are key to alerting public of imminent danger

CLIFTON – Okay, so why are sirens sounding in the morning and afternoon on the first Tuesday of month in Clifton? Is someone in love with the sirens’ shrill sounds?

Actually, the sirens are tested monthly to ensure they are all working properly. The testing occurs because in the event of a flood threat sirens will sound to alert residents of what is coming down the river. It is the San Francisco River, which flows through the heart of town. It is one of the eight fastest running rivers in North America, according to the U.S. Geological Survey. 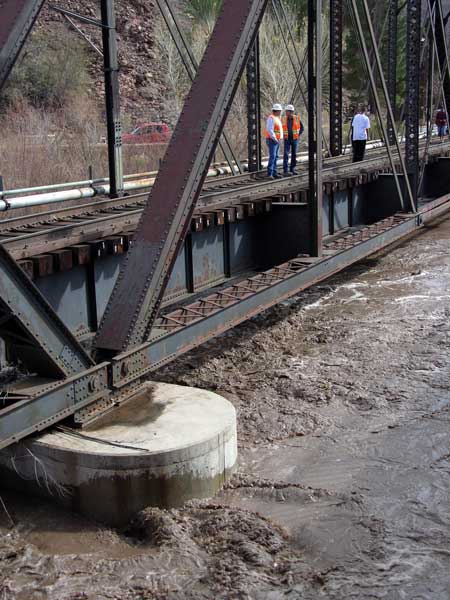 The fact that some sections of the town were heavily damaged or destroyed in the devastating Oct. 1, 1983, flood and there have been subsequent close calls has not been lost on town of Clifton officials. They note that with the existing summer heat and the peak of the rainy season (monsoon) probably not far away, there is always the possibility of flooding. Thus, officials are well underway with flood preparations aimed to help protect residents, businesses, properties and visitors, according to Clifton Town Manager Ian McGaughey. He emphasized the town’s flood siren network is an important component of flood safety. The sirens are designed to notify residents of an impending flood situation, as well as an evacuation alert if the situation worsens.

“Everyone should familiarize themselves with the flood siren tones,” McGaughey said.

The system is tested at noon and 6 p.m. the first Tuesday of each month. The steady tone indicates flooding is possible, and the public should take measures to move out of harm’s way.

“At that point, people should be proactive, particularly with assisting the elderly or others that might need assistance,” McGaughey said. “The wailing tone means flooding is imminent and evacuation to higher ground is strongly advised. Everyone should be aware that the large flood gates on U.S. 191 (Coronado Boulevard) will be shut when the threat of flooding is looming in order to protect South Clifton. That’s why being proactive and acting early at the first sign of flooding danger is so important.”

“This time each year we ramp up reviews of our emergency procedures.”

That includes testing the huge gates along the river by opening and closing the gates. In 1983, big trees became lodged under the Coronadao Bridge, forming a dam that sent water rushing into South Clifton. It was the first time ever that the river poured into the areaq. It caused extensive damage to homes and businesses there as the water was eight- to 10-feet deep.

Because of the gates are huge, locals have jokingly dubbed them as the “Jurassic Park Gates,” after a movie in which giant gates are used to keep dinosaurs from escaping from the park.

On Wednesday, June 21, McGaughey, along with other town public safety officials and department heads, held a special meeting to review the emergency operations plan, including the specific duties of each department and the coordination of efforts with local and state agencies. A component of the plan includes the distribution of sand and sandbags when the risk of flooding is elevated. 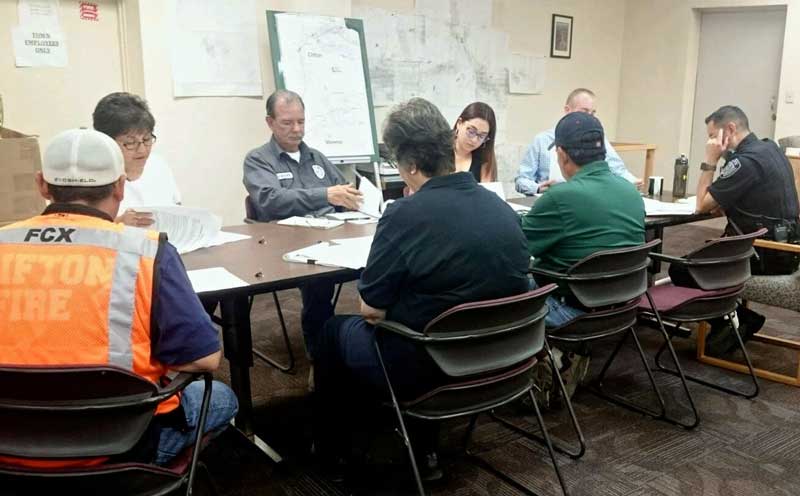 “Residents living in designated flood-prone areas can pick up a limited number of sand bags at Town Hall when conditions warrant,” Clifton Town Clerk Esperanza Castaneda said. She noted that flooding in town does not always involve the river. There are many homes built on hillsides which can be affected by strong runoff from gullies and small canyons.

That type of flooding is not unusual on Chase Creek, Shannon Hill and South Clifton, all of which have hillside homes.

Interestingly, the town’s siren alert system did not function for several years, apparently from lack of maintenance. It was puzzling that although the river at times ran from bank to bank during the years the sirens were inoperable, there was no warning system whatsoever. The system was revamped and again became functional about four years ago.

Even outside of monsoon season, flood mitigation is a top concern of town officials, said  McGaughey, who is also the town’s Floodplain Administrator, charged with enforcing Clifton’s floodplain ordinance.

“Compliance with floodplain regulations is critical to ensure the availability of homeowner flood insurance, as well as aid for mitigation projects and disaster recovery,” he said. “Clifton is unfortunately no stranger to flooding, but with preparation and solid planning, I expect the town to be ready in the event we need to act.”

In years past, Clifton officials used a telephone landline to reach Catron County officials in New Mexico, where the headwaters of the San Francisco are located. Today there is monitoring equipment along the river from Glenwood, New Mexico, to Clifton. What is certainly a major improvement in communications is that information can be relayed instantly through computers.

McGaughey invites residents to visit the town’s website where a video of the siren sounds is located at http://www.cliftonaz.com/flood-sirens.html.

During a flooding situation, an emergency operations center will be established at Clifton Town Hall. Officials track the situation as it develops via coordination with the Greenlee County Emergency Coordinator, National Weather Service, National Oceanic and Atmospheric Administration and other agencies. Based on information available, officials will decide whether to close the flood gates or take other measures. Residents should be sure to follow instructions of officials and emergency personnel to ensure everyone is kept safe, McGaughey said.