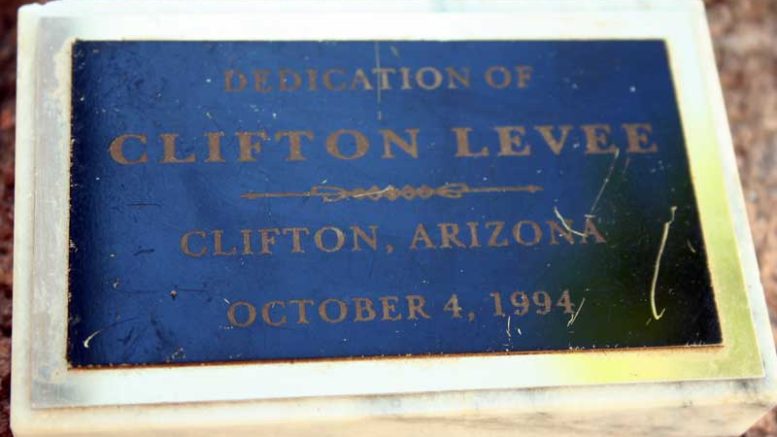 Photo By Gualterio Casias: This miniature plaque marks the dedication of the Clifton flood levee's construction. It was built by the U.S. Army Corps of Engineers and completed in 1994, eleven years after the October 1983 flood that devastated the town

CLIFTON – It is supposed to do the job, but then again there may be a chance that it will not. It is the Clifton flood levee that was constructed in 1994 to keep the San Francisco River from again flooding into South Clifton.

The maybe and maybe not is the latest in what the U.S. Army Corps of Engineers is saying about levees meant to prevent flooding or at least mitigate it, in towns such as flood-prone Clifton. That is the message Clifton Town Manager Ian McGaughey brought home from a recent workshop presented by the Corps.

Thus it is a matter of Clifton officials reminding residents that while the levee along the San Francisco lowers the risk of flooding to those now protected by the levee, it does not completely eliminate the risk of flooding in South Clifton. “Even with the levee, there is a chance of overtopping or failure,” McGaughey said in a video posted on the town website and social media. “Low risk does not mean no risk.” 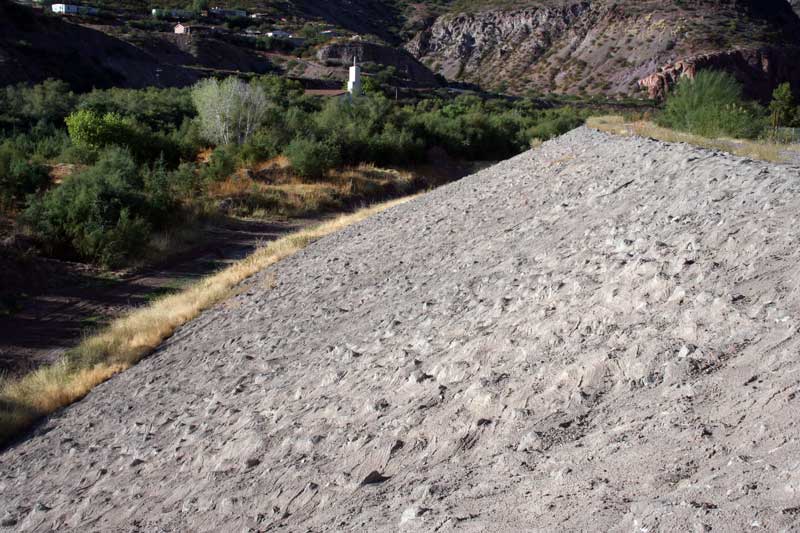 Photo By Gualterio Casias: This section of the Clifton flood levee drops about 30 feet or more to the San Francisco River bottom at left. It is the steepest part of the levee. It is constructed of earth and has a thick coat of cement mixed with large rocks. It is located along a big bend in the river. In the background is the Clifton LDS Church.

McGaughey recently attended a workshop presented by the U.S. Army Corps of Engineers called “Communicating Risk Associated with Levees.” The Corps has found that people tend to get complacent about flood safety when living behind a levee. The focus was to encourage communities to educate residents and business owners that while a levee offers protection, it is not 100% flood proof.

The town manager said there are actions people can take to help protect themselves and properties behind the levee, from purchasing flood insurance to developing an evacuation plan and flood-proofing homes and businesses. He also encourages residents to be aware of Clifton’s flood siren notification network and to always follow instructions of emergency personnel during a flood event.

Visitors to Clifton ask what the huge structures are on the south end of the U.S. Highway 191  Coronado Bridge, which spans the San Francisco River. They are giant floodgates meant to keep South Clifton from being flooded.  Locals jokingly refer to them as the “Jurassic Park” gates after a movie about a park that had huge walls to keep dinosaurs enclosed in a park.

The Clifton gates, which are about 20 feet high, and a half-mile long levee comprise that aspect of the Clifton flood control project that was completed in 1994. That was 11 years after a record flood on Oct. 1-2, 1983, heavily damaged or destroyed homes and businesses in a large sections of the town. The larger gate spans the highway and a smaller gate is located on the railroad tracks, which run parallel to the highway. There is a much smaller gate that accommodates a pedestrian walkway.

As far as anybody can recall it was the first time South Clifton had been flooded. It was a disastrous combination that resulted in that part of town being inundated by deep flood waters. The river flowed at an incredible 90,000 cubic feet per second. Trees and other large debris became lodged under the Coronado Bridge, which spans the San Francisco. Eastside and the central part of town where the Clifton Train Depot, American Legion, and former Elks Lodge are located were already inundated with flood waters.

The roiling, muddy river even spilled over the bridge, blocking it from continuing to run in its channel. It had no place to go except into South Clifton. Water reached as high as 10 feet in the lower lying areas. The flood waters’ power and depth were made particularly evident at a car dealership at the south end of town. There were cars and pickup trucks in the parking lot. It took only a few minutes for cars to be submerged. Trucks were by then halfway under water. A few minutes later only their radio antennas were visible. Then not even the antennas could be seen. 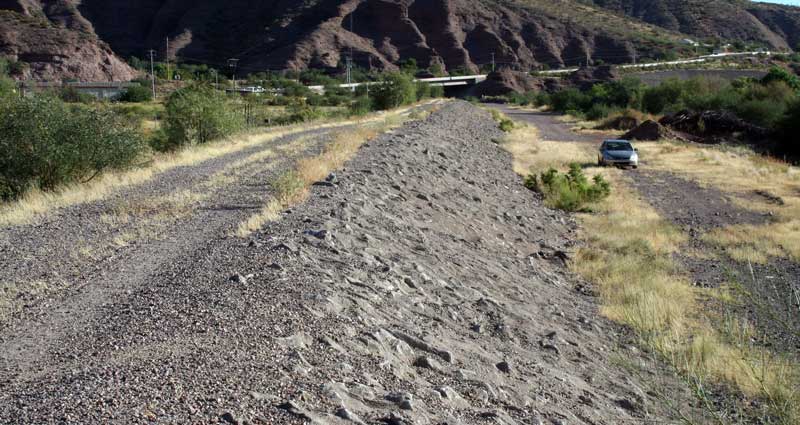 Photo By Gualterio Casias: This section of the Clifton flood levee runs north and south along the San Francisco River. The top of the levee has a walkway often used by locals for walking exercise. The road at the levee’s bottom has a road that provides access to town public works crews to maintain drainage tunnels and gates.

Flood waters rose as high as the eaves of many homes. Only roofs were visible.

During a period of about two weeks prior to the flood, it had been raining steadily in the San Francisco River’s watershed that included the immediate area around Clifton.  The ground in western New Mexico, where the river originates, was soaked deep with rainfall.

The San Francisco is one of the eight fastest running rivers in North America, according to a USGS staff member, who was on site Oct 2. By the second day of flooding the river had calmed down to some degree, but the Coronado Bridge was still impassable. By Oct. 3 the river began receding and no longer flowed over the top of the highway bridge or the railroad bridge adjacent to it. Enough of the large debris on the highway bridge was removed allowing passage for some emergency vehicles.

The Corps of Engineers apparently drove home its point during the workshop. It certainly did with the town manager.

“I hope it helps to get people thinking about ways they can keep their homes, businesses, and families safe in the event of a major flood,” McGaughey said. “it’s worth noting that 80% of homeowners affected by the devastation of Hurricane Harvey did not have flood insurance, leaving countless people with little financial assistance to rebuild their lives.”

The town tests its warning sirens sound the first Tuesday of the month. They are set off in the morning and in the late afternoon. Sirens did sound warning of the 1983 flood but the rapidly rising river caught many people by surprise. Other than to use sirens to alert firefighters about a blaze, the town did not have a warning system in place to alert people of an emergency.

Alarmingly, the sirens did not function properly for several years but are now functioning, thus the monthly testing to ensure they are working.

The floodgates along the Coronado Bridge are tested at least twice a year to determine that they can be easily opened and closed. Also, the flood levee is scheduled to be inspected this week. McCaughey said the town public works crew cleared some debris, mostly sand and dirt, from the main drains associated with the levee. They also made some minor repairs to gates in those drains.

McGaughey echoed what many Clifton residents have said about the San Francisco, which at present looks more like a big creek rather than a river. He said, “It may not look like much now, but when that thing goes, it goes big.”

Information on the National Flood Insurance Program can be found here.