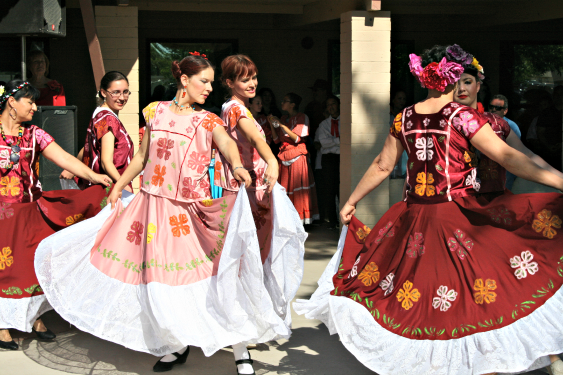 After the parade down Main Street and several other events at the St. Rose of Lima Church, the EAC Danseries took to the stage and performed for the Cinco de Mayo event. Considering the Cinco de Mayo holiday, most of the dances performed by the EAC Danseries were in fact from that era. Dance instructor, Gayla Curtis, spoke with us in reference to the historical aspect of the dances. “We don’t know precisely the age of the dances,” Curtis stated, “The whole baile folkorico scene dates back about to somewhere around the middle of the 20th century when a dance historian from Mexico City started collecting regional dances from around the country and eventually wove them into a fantastic program performed at the Bellas Artes theater in Mexico.  This kind of program has now become a tradition and has gradually moved into the U.S. where there are Mexican populations. The dances that our group performs tend to be late 19th century.” 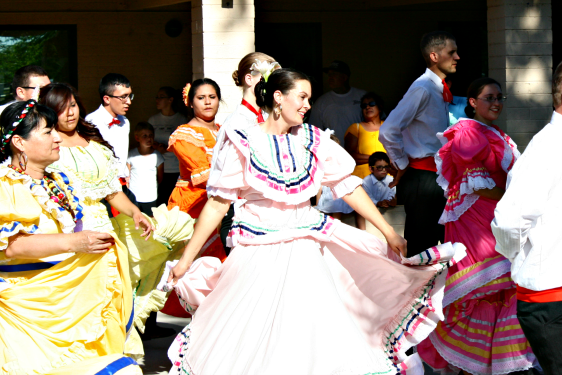 Amidst the flurry of color and pageantry, it seemed that the dancers changed costumes for every single dance. However, Curtis said that this assumption was incorrect. “We have three costumes for our dances. There are many more dances and costumes in Mexican folklorico dancing. The dances come from different regions of Mexico and each region has its own tradition and customs of dress. Sometimes each village had a different dress, but for the purpose of performance we narrow the costume down to regions or states in Mexico. The dances we do come from oaxaca, Tehuantepec, and the general area of Northern Mexico.  We change costumes to show the region that the dance comes from.”

Gayla Curtis has been working with the St. Rose of Lima Catholic Church to put on the Cinco de Mayo performance for over thirty years. And what stands out to many in the audience is how full the performer’s skirts are. “The Jalisco dresses are the heavy ones, and they are very heavy!” Curtis exclaimed, “The shirts have yards and yards and yards of material, trimmed with ribbons. These dresses reflect the dress customs of the 1890s and early 1900s and are paired with the mariachi music which came from Guadalajara.  People tend to think of them as the National Dress of Mexico, but they are not. The National costume of Mexico is the China Poblana, a white blouse with a red velvet or satin skirt, trimmed with green and with the Mexican Eagle in sequins on the front.” When asked which was the oldest of the dances, Curtis didn’t know exactly. “Possibly Tehuantepecana or Los Viejitos.  Many of the other dances come from the era of the Mexican Revolution around 1910,” she stated.

For the past thirty years, the Danseries have performed these dances. And now perhaps, we’ll know just a little bit more about them than before. With this in mind, we look forward to seeing you next year.