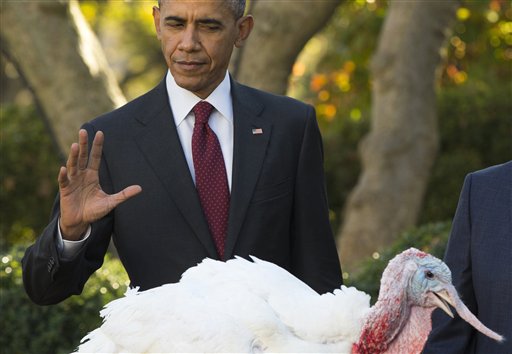 BEIJING (AP) — President Barack Obama’s pardoning of a turkey named “Abe” this Thanksgiving has led some Chinese to gloat at the Japanese prime minister’s expense.

As part of a peculiar annual tradition at the White House, Obama on Wednesday granted amnesty from the dinner table to two turkeys named “Honest” and “Abe” — from the nickname for President Abraham Lincoln. But a translation glitch in Chinese media replaced the character for single-syllable “Abe” with the surname of Japanese Prime Minister Shinzo Abe (pronounced “Ah-bay”).

Several commenters in Chinese social media focused on comparing the prime minister to an animal.

Many Chinese harbor animosity toward Japan because of its brutal occupation of much of China during World War II, and they specifically scorn Abe because of his visits to a war shrine that is seen as a symbol of Japan’s past militarism.

The faulty translation of Abe was published by state-run China Radio International and picked up by other outlets. A man who answered the CRI news hotline said editorial staff there had used the Web to translate the name “Abe.” Stories from Chinese media outlets that properly translated the name were circulating, but not as widely.