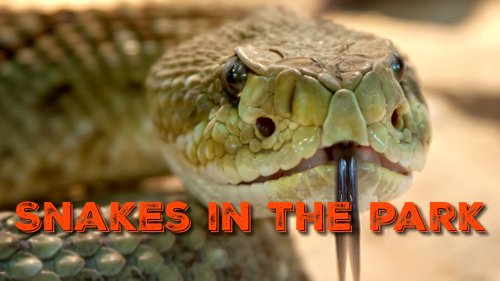 Graphic/Gila Valley Central: A 2-year-old boy suffered a rattlesnake bite while playing at the Graham County Fairgrounds Park on Saturday.

GRAHAM COUNTY – Wild things shouldn’t be in the park unless they are wild little children with sticky jam sandwiches.
A small rattlesnake was lying hidden in the tire shreds of the Graham County Fairgrounds Park on Saturday, and Bianca Sanchez’s 2-year-old son had the misfortune of finding it. The snake bit the toddler, and he was rushed to Mt. Graham Regional Medical Center (MGRMC). Other individuals at the scene killed the snake. Sanchez said while she was at the hospital staff members reported being informed of other sightings of snakes in the same park.

Sanchez’s child was released from the hospital Sunday. He still has some swelling in his arm but is recovering steadily. Sanchez, who is a Safford resident, said she believes that the county should take action.

“I think with all the families that use the playground it (would) be a good idea for the county to take action and replace the tire mulch with a rubber matting so the snakes that are in our desert environment cannot hide so easily where the kids play, so that something like this won’t happen so easily to another kid,” Sanchez said. “I also think the county or the fairgrounds should have a wildlife removal person go through the fairgrounds during rattlesnake season because it’s such a highly-populated place, and so many children are always out there. I never thought there would be a snake right where kids play.”

According to the Centers for Disease Control and Prevention,  7,000–8,000 people annually get venomous bites in the United States. Roughly five of the people bitten die each year. If left untreated, a snake bite in a child can result in internal bleeding, internal organ damage, shock and death. If someone has been bitten by a snake, do not apply a tourniquet, ice the wound or suck out the poison. Those methods are not effective. In the event of a rattlesnake bite, call 911. Keep the bite below the person’s heart if possible and remove any tight clothing or jewelry in the event of swelling.
The first and obvious precaution is to leave snakes alone if they are seen. Rattlesnakes come in a variety of colors and shapes and not every rattlesnake has rattles. Young rattlesnakes have no rattler and they are still capable of biting. Secondly, do not wander around in the snake’s hunting time or obvious habitat. Snakes usually hunt at night or early morning. During the daylight hours they keep to shady areas, so avoid tall grass. Be especially careful when climbing or moving firewood, since rattlesnakes hide in the shade of rock crevices and fallen trees. When you are swimming, never grab a floating stick as rattlesnakes are very agile swimmers. Lastly, do not touch a freshly killed snake. Dead rattlesnakes have a reflex in which they can still strike.

There are 25 different breeds of rattlesnakes in the United States. Most rattlesnake bites are on the hands and ankles because the snakes are accidentally stepped on or touched.