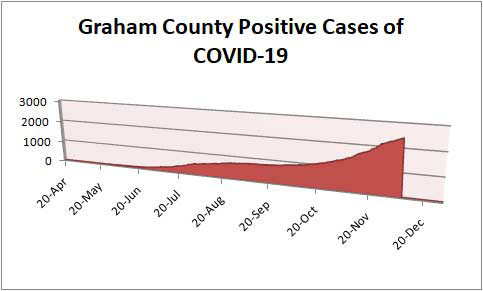 SAFFORD — The Gila Valley has now topped 2,400 cases of COVID-19 since the start of the pandemic.

There have been 204 cases so far in December, with the Safford area accounting for 60 percent of those cases. Twenty-five percent of December’s cases have involved Thatcher residents, while 9 percent have been in Pima and 6 percent on the San Carlos Apache Reservation.

More than 1,000 of Graham County’s cases are considered active and there have been 38 deaths.

Greenlee County Health Department reported eight new cases Monday evening, bringing the county’s total to 305 since the start of the pandemic, meaning about 3 percent of the county’s population has tested positive thus far. The county has a positivity rate of 16.7 percent.