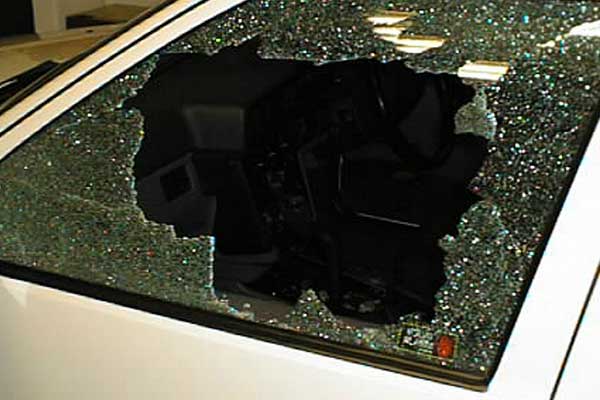 A Safford police officer was dispatched to a bar on Main Street in Safford last Saturday just before midnight in reference to criminal damage and burglary of a vehicle.

The reporting party told the responding officer that somebody had smashed her window and taken her purse while she was in the bar. The window appeared to be broken by a bat or tire iron. The woman described her purse as a blue backpack style purse. She said the contents of her purse included her driver’s license, a credit card, check book, insurance card, a $2 bill and a paycheck. She apparently also had social security cards for herself and her children in her purse.

At the same time, another officer was responding to Sunrise Village, where a man had reported finding a check book in the middle of the roadway. Some other papers, receipts and a business card were found near the checkbook. The items belonged to the woman who’s car was broken into on Main Street.

Not long after she left the police department, she called to report that she had found more of the items from her stolen purse on Highway 70 near Montierth Lane. Authorities followed a trail of items strewn along Highway 70 and throughout Little Hollywood. The woman’s license, credit card and other important items were not found.

On Monday, an officer reviewed surveillance footage from Main Street on the night of the burglary. At approximately 9:21 p.m. on Saturday, the footage showed two men – known to the officer through prior contact – exit the bar and walk south on 5th Avenue. The two men were met by a third man – also known to the officer through prior contact – near where the woman’s car was parked. One of the men pointed to the victim’s car, then walked to the driver’s side and out of view of the surveillance camera. The video also has audio and banging can be heard until glass shatters. The man then could be seen at the rear of the vehicle holding something in his left hand. According to the police report, the item was consistent with a large wallet. The three men then got in a nearby vehicle and drove away.

While the officer was viewing the footage, the victim’s wallet was returned to the police department by a resident of Sunrise Village. The wallet was found in the front yard of a resident of the park. All medical cards, except one, were in the wallet. The woman’s driver’s license and credit card were also recovered. The $2 bill was not recovered.

As of this report, no arrests have been made in the case.