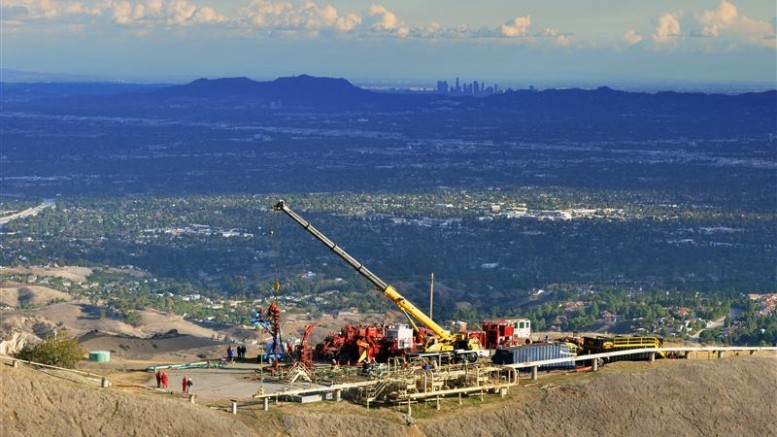 LOS ANGELES (AP) — California’s gas and oil regulator issued an emergency order Wednesday requiring a utility to provide a plan to stop an uncontrolled leak from a massive natural gas storage field outside Los Angeles that has neighbors concerned for their health from the sickening stench.

Southern California Gas Co. was given a day to provide data it has collected from the leak that has persisted nearly a month near Porter Ranch and to provide a plan for how it will plug and seal the well.

Steve Bohlen, the state’s oil and gas supervisor, said he issued the order “to prevent damage to life, health, property, or natural resources.”

Bohlen had said Friday that he expected the leak to be stopped as soon as last weekend.

The rare leak began Oct. 23 in a well at what is believed to be the largest natural gas storage facility in the West. More than 100 wells at the Aliso Canyon storage field are used to pump natural gas deep into an abandoned oil field when demand is low and pump it out when demand rises in cold weather.

The well that is leaking starts atop a 3,000-foot peak in the Santa Susana Mountains between Los Angeles and Ventura counties and goes more than a mile-and-a-half underground.

Residents have complained of nausea, headaches and other maladies, but the gas company said it does not pose an imminent health threat.

A foreman at the work site, which is about a mile from houses, got sick Tuesday and was taken by ambulance to a hospital and then released, the company said in a statement sent to neighbors. A spokesman for the company didn’t immediately have information about the worker.

Natural gas is likely wafting away from the well, though residents can smell the stinky chemical that is added to the odorless gas to detect leaks and avoid disasters from the flammable fossil fuel.

High winds prevented work at the site earlier this week, though the company reported some progress Wednesday to pour a mix of briny water and heavy crushed rock into the well, said company spokesman Javier Mendoza.

The company can be fined if it doesn’t follow the order, though Teresa Schilling, a spokeswoman for the state Department of Conservation, said she expects Southern California Gas will provide the information.

“We keep remaining positive that we’ll be able to staunch the flow of the well,” Schilling said. “That hasn’t happened, so we’re doing what we need to do to ensure public safety.”