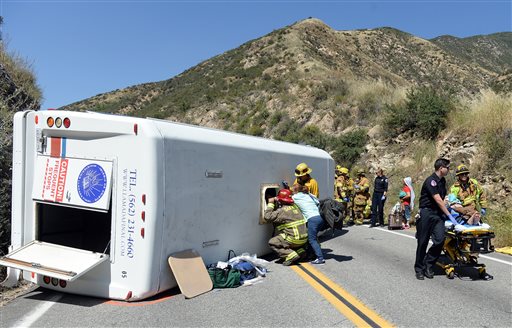 Approximately 20 people were injured, 4 with major injuries, after a small tour bus crashed and rolled over on highway 330 approximately 2 miles north of the 210 freeway Sunday, May 22, 2016. Both directions of the 330 are currently closed. Cause of the crash is under investigation. (Will Lester /The Inland Valley Daily Bulletin via AP) MANDATORY CREDIT

HIGHLAND, Calif. (AP) — A shuttle bus returning from a women’s church retreat rolled over on a highway in Southern California’s San Bernardino Mountains, seriously injuring six people and leaving 14 others with minor injuries.

Ambulances took the victims to the hospital Sunday and all were expected to survive, San Bernardino County fire Capt. Jeremy Kern said.

The bus carrying 22 people was one of several transporting about 200 women from an annual mountain retreat back to their church in Downey, a church official said. Two people aboard were not hurt.

“We got the news right after regular Sunday service,” Robert Acosta, assistant to the senior pastor at Iglesia de Cristo Ministerios Llamada Final, told the San Bernardino Sun. “It was unnerving, but we immediately pulled together.”

The 2000 El Dorado bus hit a sedan as it came down the mountain, California Highway Patrol spokesman Juan Quintero said. No one in the car was hurt, and the agency is investigating the cause of the crash.

The bus turned on its side across State Route 330, blocking the highway and shutting down a 16-mile stretch near Highland for hours.

The crash site is about 60 miles east of Los Angeles and about 20 miles from the site of a 2013 bus crash on another highway in the San Bernardino Mountains.

Eight people were killed when that tour bus crashed on its way back from Tijuana, Mexico.