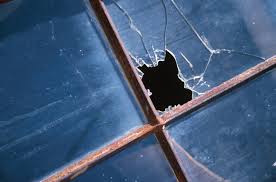 On December 30th, 2015, officers were called out to evaluate a criminal damages claim in Safford. The reporting officer writes,

“Upon arrival, I met with the reporting party, Angela Escobar. Escobar reported she [arrived at] work this morning and saw the broken glass, and did not know if there was anyone inside. [Officers] entered and cleared the building.

I observed the glass broken on the floor of the waiting room, and one of the blinds laying on the floor. There were two broken windows that appear to have been broken from the outside. The windows are on the Southeast corner of the building facing 7th Street.

Escobar said there has not been anyone in the office since last week. Escobar checked and made sure nothing was missing from the office.

While surveying the damage, I did not locate anything that was obvious that broke the windows. Damage was documented with body camera.”

(This quotation has been edited for slight grammar and punctuation errors)