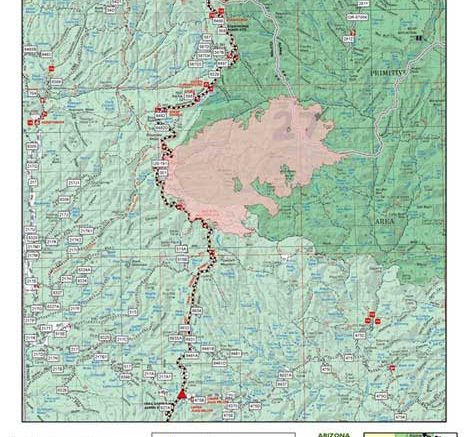 Contributed Photo/Apache-Sitgreaves National Forest. The Bringham fire north of Morenci has burned 22,792 acres and is at 37-percent containment.

MORENCI —High temperatures, low humidity and strong winds predicted over the next week are expected to curtail efforts to bring the Bringham fire under control.

The wildfire just north of Morenci, caused by lightning June 6, has burned 22,792 acres and is at just 37-percent containment as of Thursday, according to White Mountain Zone incident management.

Crews have focused on protection of area assets, including the Blue River area and Blue Lookout Tower, and the VT and Filleman cabins.

U.S. Highway 191 is closed in both directions between mile marker 189, just past Juan Miller Road, and mile marker 225 at Blue Vista. The closure is in effect through June 27, but incident command said that closure could be extended to July 4.

On the San Carlos Apache reservation, two wildfires are starting to enter the mop-up phase.

The Dry Lake fire in Bylas, started by lightning June 5, is at 93 percent containment. It has consumed 4,266 acres.

The Blue River fire north of San Carlos, also started by lightning June 5, is at 85-percent containment. It has burned 30,400 acres.