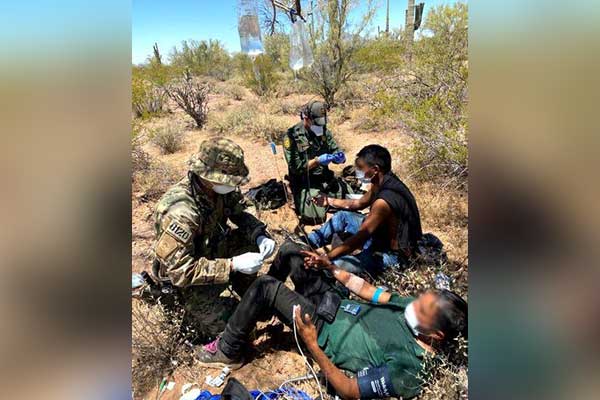 Agents are routinely called to triage illegal aliens who have become lost or abandoned by smugglers across the unforgiving Sonoran Desert.

TUCSON, Ariz. – For the second time this month, U.S. Border Patrol agents responded to dozens of 911 calls, rescuing more than 30 migrants throughout southern Arizona over the weekend.

Tucson Sector agents received numerous 911 distress calls starting Friday, many from migrants claiming to be lost in the desert within the Tohono O’odham Indian reservation. The majority of callers were Mexican men who illegally entered the country through the desert and were then presumably abandoned by their smuggler.

Agents also rescued five migrants who activated a rescue beacon after becoming lost in the remote mountains west of Ajo.

All individuals rescued are processed for applicable immigration violations once they are medically cleared for travel.

Arizona’s desert is dangerous for those unprepared for its remote, harsh terrain and unpredictable weather. The U.S. Border Patrol advises anyone in distress to call 911 or activate a rescue beacon as soon as possible.