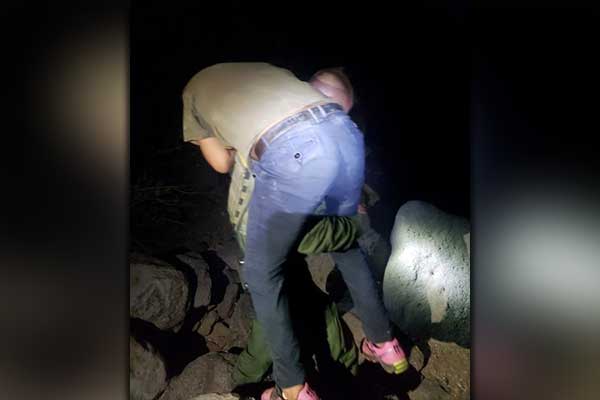 TUCSON, Ariz. – U.S. Border Patrol agents and an Air and Marine Operations (AMO) helicopter crew located and rescued an injured migrant by carrying him, on their backs, down a mountain south of Gila Bend, Arizona, Wednesday morning.

The rescue began late Tuesday night when a 911 call was routed to Tucson Sector agents. The caller claimed to be injured and lost in the desert somewhere north of the International Boundary.

After determining the man’s general location, agents and a U.S. Customs and Border Protection AMO helicopter began the search. Pilots spotted the individual on top of a rugged mountain peak just before midnight and landed to provide water and wait with the subject until the Border Patrol agents arrived.

Agents completed a strenuous hike up the mountainside to assess the subject. They found him unable to walk and took turns to carry him over their shoulders for more than a mile over rocky, loose terrain back down the mountain.

The 24 year-old Mexican man, illegally present in the country, was taken to a local hospital to be treated for his injuries. He will be processed for immigration violations once he is medically fit.

“We work day and night with our partners to keep people safe,” said Tucson Sector Border Patrol Chief Roy Villareal. “Smugglers don’t care if border crossers live or die, but for our agents, saving lives is a top priority.”

In the current fiscal year, Tucson Sector has performed over 1,000 rescues, many that originated when a foot guide smuggling vulnerable people into the United States left behind an unsuspecting migrant who could not endure the journey.