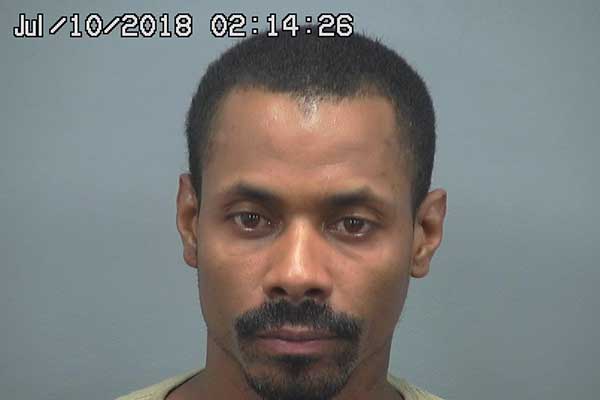 SAFFORD – Late Monday night, officers responded to a hotel on Entertainment Avenue in reference to an unwanted subject in the area. A man matching the description given, was found just outside the pool area. When the officer made contact with the man, asking him what he was doing, he responded that he was just using the Wi-Fi, and showed he had the password written on a card. The officer informed the man that authorities had been called because the hotel wanted him to leave the area.

The officer asked the man his name, and he told them it was Alex Sanabria and gave a date of birth. The officer noticed that as he was asking Sanabria questions, he appeared to start having tremors and sweating. When asked if he had anything illegal, Sanabria stated that he did not and he didn’t know why the police wanted to check. He agreed to empty his pockets, but as he was quickly removing items but not fully showing what he had, the officer noticed Sanabria cup an object in his hand as he removed it from his front pocket and then put it back into his pocket. The officers asked several times what he had put in his pocket, and he would partially pull his pocket out and say there was nothing there. An officer asked if he could feel the pocket himself, and Sanabria said that he could. During this time, Sanabria was noticeably trembling and sweating. The officer at first thought he felt a syringe, but Sanabria told him that it wasn’t and when the officer removed the item, it was an empty pen tube that appeared to have residue inside. After being handcuffed, Sanabria admitted to smoking pills using the pen tube and also reported to the officers that there was a broken glass bulb in his back pocket that he also used to smoke.

When the officer ran the information provided by Sanabria through dispatch it returned with no record found. Sanabria was informed by the officer that they believed he gave them false information. According to the report, he continued to be untruthful and then admitted to giving a wrong date of birth because he was scared. After giving them another date of birth and no record being found, police asked Sanabria where his ID was. He stated that it was possibly at the trailer he was staying in or in Clifton.

Authorities took Sanabria to the trailer but no ID was found. The officer contacted the US Customs and Border Patrol Station in Willcox and informed them of the situation and requested their assistance in identifying the man. The officer was told they could bring Sanabria to their station for fingerprinting. When the officer told Sanabria that he was going to be transported to the Border Patrol station to identify him, he said he would tell the truth and verbally identified himself as Rafael Sanabria, along with a date of birth and social security number. With this information, authorities discovered that Sanabria had a warrant for his arrest. The warrant was confirmed and Sanabria was transported and booked in the jail.

The officer asked Sanabria what he smoked out of the pen tube, and he reported that he smoked Xanax which is a prescription-only benzodiazepine. Later at the police department the officer tested the tube and glass bulb, which both texted positive for methamphetamine.