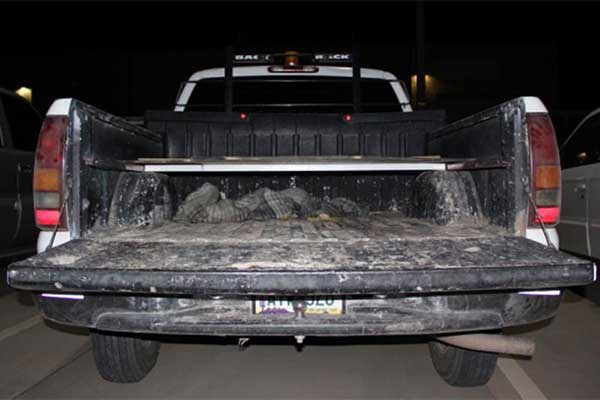 LORDSBURG, N.M. – U.S. Border Patrol Agents from the Lordsburg station overcame the challenges of patrolling vast terrain, culminating in the discovery of a human smuggling attempt.

This past Friday evening, Lordsburg Agents conducted a traffic stop on a white Chevrolet Silverado pick-up truck that was outfitted with amber strobe lights on the roof, common to construction vehicles. The truck was heading north from the international boundary on a desolate county road often utilized by smuggling organizations for illicit operations.

Agents activated their emergency equipment and attempted to stop the vehicle along the remote highway. The truck in question slowed down and the driver and front passenger jumped out of the truck and fled back to Mexico.

During the search of the truck, agents discovered seven people attempting to conceal themselves within the cab. Further inspection revealed an additional eight people hiding beneath a sheet of plywood in the bed of the truck. The 15 individuals were questioned regarding their citizenship and all claimed to be Mexican nationals. The subjects admitted to being illegally in the United States and were transported to the Lordsburg Station for further processing.

All individuals were expelled back to Mexico under Title 42.

This incident demonstrates the vigilance of U.S. Border Patrol Agents and highlights their ability to identify tactics utilized by smugglers and respond rapidly to help stop Transnational Criminal Organizations from operating in our communities.

U.S. Customs and Border Protection welcomes assistance from the community. Citizens are encouraged to report suspicious activity to the U.S. Border Patrol while remaining anonymous by calling 1-800-635-2509.