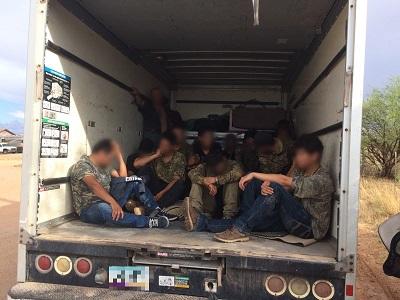 Agents in the Coronado National Memorial area observed a group of suspected illegal aliens walking through the desert towards Montezuma Canyon Road as well as a box truck stopping multiple times along that same road.

Additional agents observed the truck leave the memorial area and followed behind. A short time later, the driver of the box truck self-yielded.  An agent stopped behind the truck, approached the driver, and requested to search the back of the truck, to which the driver agreed and opened the rear door.

The driver was arrested for human smuggling and all the illegal aliens were transported to the Brian A. Terry Border Patrol Station to be processed for immigration violations.

As Arizona’s temperatures rise, people hiding in vehicle trunks or trailers are at a greater risk of suffering from heat injury, physical injury, or death.