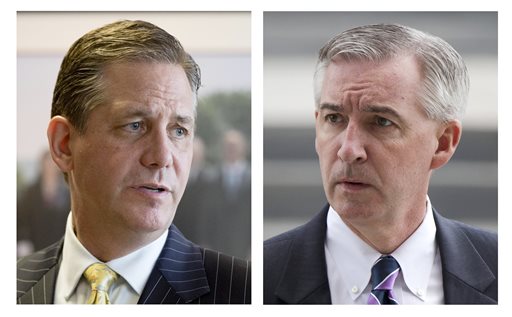 FILE - This 2015 combination of file photos shows, Montgomery County officials, commissioner Bruce L. Castor Jr., left, and first assistant district attorney, Kevin Steele, in Norristown, Pa. Castor, a Republican and Steele, a Democrat, are running for Montgomery County District Attorney in the Tuesday Nov. 3, election. The race for county prosecutor outside Philadelphia will likely influence whether Bill Cosby continues to be the subject of an investigation in an alleged 2004 sexual assault. (AP Photo/Matt Rourke, File)

PHILADELPHIA (AP) — A career prosecutor involved in the re-investigation of a decade-old sexual-assault claim against Bill Cosby won a suburban race for district attorney on Tuesday, a result that could lead to criminal charges being filed.

Democrat Kevin Steele will lead the Montgomery County office where he has been closely involved in a recently reopened investigation of a 2005 sexual-assault complaint against the entertainer. Prosecutors have a January deadline to bring charges in the 2004 encounter at Cosby’s gated home.

The investigation was expected to end if Steele’s opponent, Republican Bruce L. Castor Jr., returned as district attorney. Castor had held the post until 2008.

Castor declined to charge Cosby a decade ago and recently questioned the accuser’s credibility. The accuser sued him and said she would stop cooperating in the case if he won.

Steele, after declaring victory, told supporters, “You made a choice to take it forward, to fight for victims, to fight for people who have been the subject of crimes,” the Philadelphia Inquirer reported.

The Cosby case became a hot-button issue in the race amid news an investigation had been reopened into a complaint by former Temple University employee Andrea Constand.

She alleged in 2005 that Cosby, who starred as Dr. Cliff Huxtable on “The Cosby Show” from 1984 to 1992 and has been married for decades, had drugged and assaulted her at his Montgomery County home the year before. At the time, Castor announced he would not charge Cosby, saying both parties could be portrayed in “a less than flattering light.”

Later that year, Constand settled a civil lawsuit with Cosby for an undisclosed sum soon after he was forced to give a deposition. During the deposition, released this year, Cosby acknowledged a series of sexual relationships with young women, including some who now allege they were drugged and assaulted. The comedian called all the sexual activity consensual.

Castor has said that Constand described a more serious sex crime in the lawsuit than she had given to police.

Constand, of Toronto, filed a defamation lawsuit against Castor last month, accusing him of making her “collateral damage for his political ambitions.”

The current district attorney and Steele’s boss, Risa Vetri Ferman, decided to leave office for what was a successful run Tuesday for county judge. She has declined to discuss the renewed investigation but issued a statement praising sex-assault victims for having the courage to come forward.

She and Steele, her top deputy, have been leading the new investigation of Cosby. Two months ago, county detectives went to Canada to re-interview Constand.

“Bruce Castor had an opportunity to bring charges, and he failed to do so,” he said in a 30-second ad that debuted two weeks before the election.

Castor’s office had interviewed a few women who came out early to support Constand and to say that Cosby had assaulted them. But Castor, who was district attorney from 2000 to 2008, said he could not have known that dozens of women would ultimately step forward.

“The information about all of Cosby’s alleged victims came to light after I left the D.A.’s office,” Castor said. “Now the election rolls around and somehow it’s my fault?”