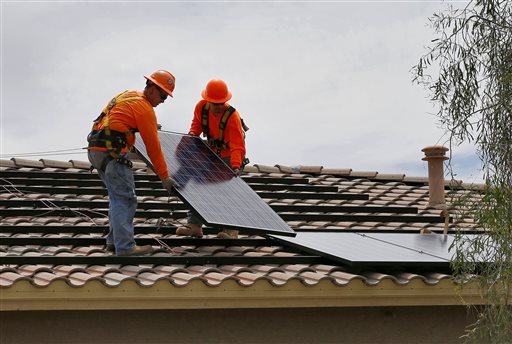 In this July 28, 2015, photo, electricians Adam Hall, right, and Steven Gabert, install solar panels on a roof for Arizona Public Service company in Goodyear, Ariz. Traditional power companies are getting into small-scale solar energy and competing for space. The emerging competition comes as utilities and smaller solar installers fight over the future of the U.S. energy system. (AP Photo/Matt York)

ALBUQUERQUE, N.M. (AP) — Traditional power companies are getting into small-scale solar energy and competing for space on your rooftop.

The emerging competition comes as utilities and smaller solar installers fight over the future of the U.S. energy system. While the market for residential solar power remains a financial drop in the bucket for a big utility, the installation of solar panels overall grew by more than 50 percent in 2014 and is on track for another record-breaking year at time when the traditional utility business is pretty flat.

“The whole theory is you need to serve your customer or someone will serve them for you,” said Raiford Smith, a vice president at CPS Energy in San Antonio, Texas, where 3,000 customers are interested in getting utility-owned rooftop panels. “I think the entire market is in a race for rooftop.”

These moves may have a range of effects for customers. The utilities experimenting in Arizona, Georgia, Michigan and Texas could make solar more affordable for average consumers by energizing competition and driving down prices. Some utility programs may be beneficial to people who cannot afford big up-front investments, get affordable loans or find existing solar leases too cumbersome.

Smaller solar companies fear the incumbents will use their power to drive competitors from the market. After all, every time an installer puts solar panels on a home, a utility company sells less power and makes less money.

These experimental programs are one part of a bigger, yearslong battle between the solar industry and utilities. Since 2013, legislation to limit rooftop solar has been introduced in nearly two dozen states.

Some utilities like NV Energy in Nevada and PNM in New Mexico have debated charging solar customers special fees since they still buy electricity from the traditional utility system but end up paying less money to support common infrastructure. Even small fees could have big consequences since the financial decision to install solar panels can be a close call for many consumers.

For example, Gregg Dufort said he wanted to install panels on his Phoenix home but couldn’t justify spending $25,000 on an investment that he estimated would pay off in 20 years or more. He considered leasing solar panels, but found the multi-year leases would be difficult to end if he eventually sold or rented the property.

Instead, he became the first customer this year to lease part of his roof to Arizona Public Service Co., which installed all the equipment at its own cost. APS pays Dufort $360 in annual credits on his power bills. Arizona regulators capped the pilot program at 1,500 homes. So far, several dozen homes have been outfitted. Installations on another 500 homes are ongoing or will soon start.

“Somebody had to figure out a way to do it because we had this huge untapped energy source out here,” Dufort said. “And the prohibitive part of it is the cost.”

APS’ manager of renewable energy, Marc Romito, said the utility will use the program to test new equipment, batteries and distribution systems.

Critics accuse APS of rigging the system by undervaluing the solar energy, which lowers prices and makes it difficult for rivals to compete. APS generally faces less risk than competitors since regulators grant the monopoly guaranteed profits on all investments, including solar panels.

Regulators will be watching to see if Georgia Power uses the advantages of its monopoly electric business — for example, customer databases, advertising budgets or staff — to subsidize its commercial solar venture. So far, no formal complaints have been filed.

In Michigan, Consumers Energy is asking that it get paid a referral fee anytime it successfully connects a customer with a solar installer. It’s also offering financing for solar projects through a bank that specializes in home-improvement loans.

Bradley Klein, an attorney for the Environmental Law and Policy Center, said there should be a way for Consumers Energy customers to share their electrical usage data with any solar installer, not just those selected to participate in Consumer’s program.

“As these markets are opening. We want to make sure there’s full and fair competition and there’s not an unequal playing field,” he said. 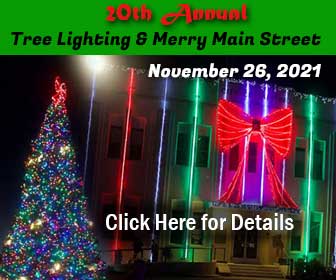