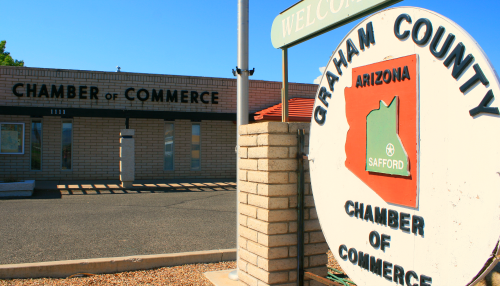 SAFFORD – The Graham County Chamber of Commerce is changing, and its new director is helping it leap forward by utilizing modern technology and thinking.

New Executive Director Patrick O’Donnell began his tenure 11 weeks ago. He said he has big plans for the chamber.

“The biggest change is that the chamber is going to be out there and more visible,” O’Donnell said. “We’re working hard to get the chamber in the paper and in the news when that’ possible. We want the people to know about the chamber and the members of the chamber.” 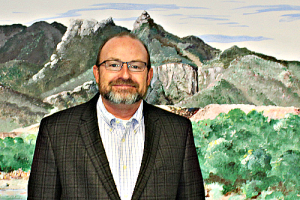 The major changes for the chamber involve visibility in the community and increasing its digital presence on the Internet. An individual has even been hired specifically to evolve the chamber’s online presence. Among other things, the chamber’s Facebook page has been updated. While on this quest to catch up with the digital age, O’Donnell found not only did the chamber have a Twitter account, but it had three separate accounts.

Another large change ahead for the chamber is that O’Donnell is planning to alter its luncheons to include educational lectures. Teaming with various business departments at Eastern Arizona College (EAC), O’Donnell plans to aim the chamber luncheons toward education. The luncheons would host a speaker from EAC, who would go over topics such as training staff, positive customer service, inventory management, record keeping and Internet marketing.

Since EAC has just barely started its fall semester, the new luncheons haven’t been set on the agenda quite yet, but O’Donnell is optimistic.

O’Donnell is also striving to bring back good traits of the chamber’s past as well. In bygone years, the chamber would have every single local event on its calendar. Working with the various businesses and government agencies, O’Donnell is striving to bring back the in-the-know of events for the chamber. With its new online contacts, the Chamber of Commerce boasts it will soon have every local event in Graham County listed on its website.

However, that isn’t all that is changing. O’Donnell is also working on a new slogan for Graham County. Not only is Graham County known for its retail and restaurant opportunities, but it also has over three million acres of public lands. O’Donnell plans to incorporate these appealing qualities of Graham County into the slogan, “Graham County: Shop, Eat, Explore.”

The Graham County Chamber of Commerce was founded April 12, 1926. However, the building in which it is now located wasn’t built until the 1960s. Last year, the chamber went through two executive directors and the resignation of the entire board of directors. An interim board was then put in place until a permanent board was selected earlier this year.

While the chamber experienced a rough overhaul, it is now off and rolling into the future.

Time’s almost up to donate to the Infinity Tree