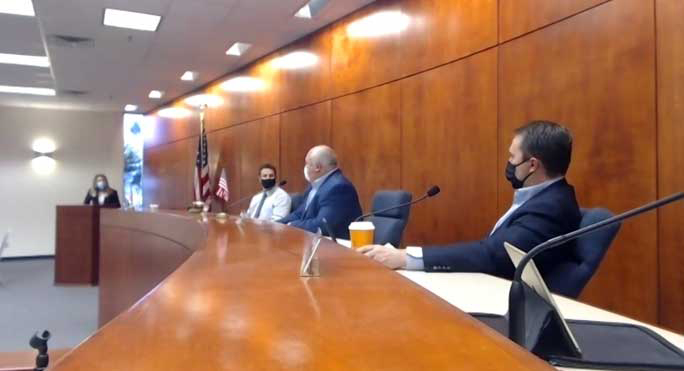 A screenshot of Monday's Graham County Board of Supervisors meeting shows the board in discussion with representatives of Bayacan over Byacan's proposal to re-zone property in Bonita for a medical canabis grow. Following discussion in which the board declined to postpone action, Bayacan withdrew its application. - Contributed Photo

SAFFORD — Following more than an hour of discussion, and the unwillingness of the Graham County Board of Supervisors to postpone a decision, the developers seeking a re-zoning in order to develop a medical cannabis grow in Bonita withdrew their application.

“The hurdles the applicant will have to overcome; I don’t know how they’re going to get over them, whether we give it another 30 days, or 90 days or any amount of time,” said Supervisor Danny Smith, R-Dist 3, whose district includes the land in question.

Smith also questioned the accuracy of the economic impact study presented by Bayacan, including how many jobs would go to Graham County residents.

“There’s not a large connection between southern Graham County and the Valley in that way. Benson is closer to this proposed greenhouse than Thatcher is; it’s 55 miles to Benson and 56 (miles) to Thatcher,” Smith said.

He also brought up Bayacan’s ownership group’s history with Graham County as the previous owners of EuroFresh, specifically repeated appeal of property tax levies by EuroFresh between 2005 and 2010, and NatureSweet between 2013 and 2016, costing the county $463,000 in defense of the appeals.

“I don’t expect that to change. It would be unusual for that pattern to change,” Smith said. “There’s been a common phrase that there may be broken trust between Graham County and the operators of NatureSweet or EuroFresh, and I would say, ‘Yeah, there probably is.’ So there’s a tremendous amount of work to be done.

“I don’t know what the applicant would have to do to change the mind of the neighborhood; I’m not sure how they would change . . . my mind,” he continued.

E-mailed requests for comment from Bayacan officials were not immediately returned.

Bayacan was seeking a change from general land use (A zoning) to unlimited manufacturing land use (M-X zoning) in order to purchase and refurbish one of the NatureSweet greenhouses (known as Site 6)in Bonita into an indoor medical cannabis grow facility.

The greenhouse encompasses 53 acres; however, officials at Bayacan told Gila Valley Central that about 48 acres were to be used to farm and the other five would be used for equipment and administration.

Bayacan held two jobs fairs in Safford the previous two Saturdays, taking applications for 150 jobs needed at start-up if the re-zoning had been approved.