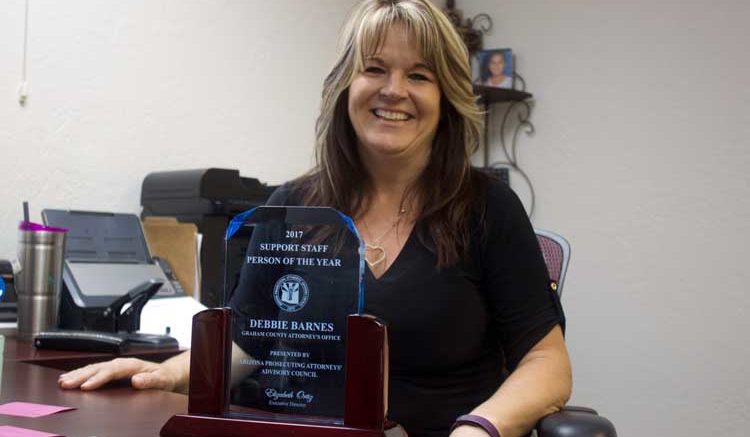 SAFFORD – In the Graham County Attorney’s Office, a friendly face has been welcoming co-workers and visitors for the past 21 years. Recently, that friendly face was given special recognition as office manager/county attorney paralegal-assistant Debbie Barnes was given the Arizona Prosecuting Attorneys’ Advisory Council (APAAC) award for Support Staff of the Year. 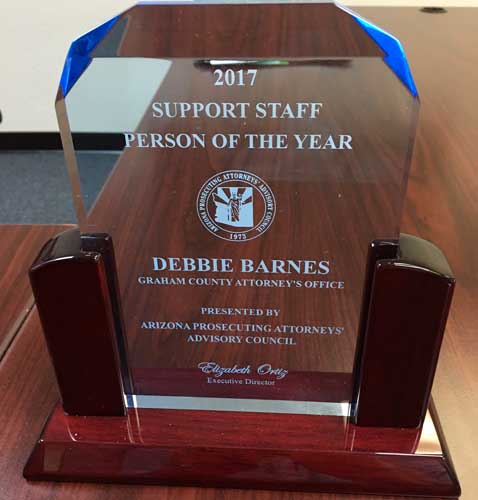 In the same vein as Graham County Chief Deputy County Attorney L. Scott Bennett earlier award for APAAC’s small jurisdiction Arizona Federal Prosecutor of the Year, Barnes was selected by a vote of all of the county attorneys and members who make up APAAC after being nominated for the award by Graham County Attorney Kenny Angle.

Barnes said she was shocked when they announced her as the winner and that she felt the other nominees from across the street were deserving of the award.

“I about choked on my food at the moment,” Barnes said. “It was a pleasant surprise, that’s for sure. (It) was very unexpected.”

While Barnes has excelled in numerous areas of her work throughout the years, Angle specifically nominated her for going above and beyond the call of duty in regard to having a critical response to the devastating flood from October 2016’s freak hail storm and the aftermath, which entailed having to relocate the entire Graham County Attorney’s Office as the former space was renovated after the flood damage and then reorganizing everything back after the remodel. Angle recalled how Barnes came in on a holiday weekend to discover the office flooded with dirty, odorous water and immediately went about rescuing files and computers that otherwise would likely have been lost.

“She was the only one in this entire courthouse (and) came in here by herself and waded through dirty water to save the things that she could save,” Angle said. 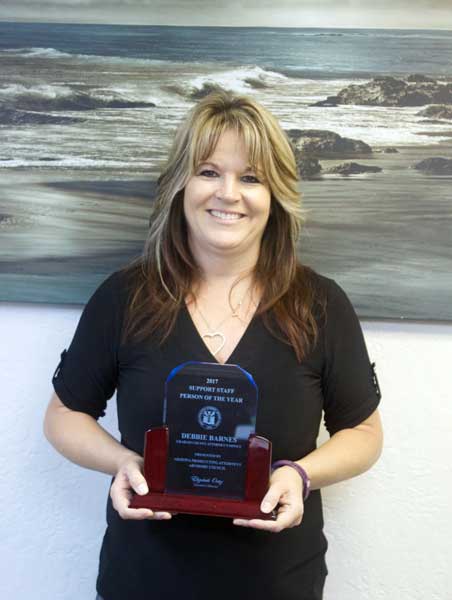 After the immediate rescue effort, Barnes then reached out to get someone to pump out the water.

“Had she not been here, that water would have stayed from Sunday to Tuesday and would have probably caused a lot more damage,” Angle said. “Very few people know about what she did during that time.”

After the initial cleanup, the office had to relocate across the street, including the removal of hundreds of pending court cases.

“It was a stressful time and Debbie did a lot to keep us organized and on track,” Angle said. “And not one time did our attorneys ever go to court and say that they could not find a file because of what happened with the flood.”

In his nomination letter, Angle expounded on his thoughts on Barnes’ performance.

“Debbie did not take any significant time off work during this seven-month ordeal because she knew we were all counting on her to keep us going,” Angle wrote. “She went above and beyond what anyone could ask an employee to accomplish. Debbie is without equal as a legal assistant. Every day, year after year, Debbie has simply been amazing. Nothing slows her down. Missing files, missing attorneys, secretaries disappearing or even horrific floods do not stop her from doing outstanding work. We would have been lost without her.”

Barnes told Gila Valley Central that she enjoys working with the people in the office and loves to come to work every day.

“This has been my career since I was in high school, and I can’t really imagine doing anything else,” Barnes said. “I really enjoy what I do.”

Bennett honored as Prosecutor of the Year