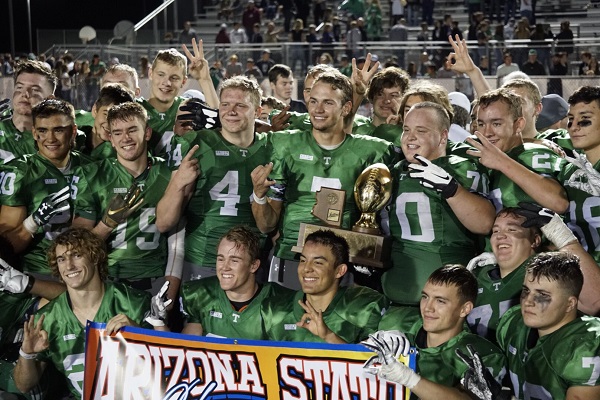 Thatcher dominated the game from the opening kickoff. Their defense was stingy and flying around with big hits early against Round Valley.

The Eagles called on quarterback Jack Kortsen with 5:44 left in the 1st quarter and he answered with a 47 yard touchdown run to give Thatcher the early 7-0 lead.

The Elks answered on the next possession with a nice drive that stalled at the 12 yard line. That would set up a 29 yard field goal try for Sergio Camunez that was blocked by Cole Motes and picked up by Riley Morris and returned nearly 50 yards. Unfortunately for Morris that would be his last play of the game. He suffered a gnarly ankle injury that required an air cast and he was carted off to a local hospital. The Eagles weren’t able to capitalize on the good field position and the score remained 7-0.

On their next possession the Elks tried a new look with the “Wildcat” formation. They lined up wide receiver Tayvin Bevell at quarterback and he found running room to the left and right to set up another scoring chance for Round Valley. On the next play Bevell went left with running room but was hit big and coughed up the ball. Eagle safety Kortsen picked up the fumble and returned it 85 yards for another Eagle touchdown. The Eagles led 14-0 with 8:44 left in the 1st half.

On the ensuing drive for the Elks wide receiver LJ Foster was injured in the middle of a pile. The game was delayed 30 minutes as they attended to Foster on the field. It appeared to be a back injury as they immobilized him immediately and waited for Gilbert Fire to arrive and take over the situation. Because of the long delay, both teams were allowed to warm up again before resuming play.

With 3:00 left in the first half the Eagles were forced to punt. Round Valley failed to cover Quinton Turley and Punter/QB Kortsen took the snap and tossed a pass to his left to a wide open Turley, who went 59 yards for another Eagle score. Running Back Brock Jones added another score before halftime to give Thatcher a commanding 28-0 lead at halftime.

Kortsen added a 1 yard TD in the 3rd quarter for the final Thatcher score of the game. Round Valley QB Kayson Wolfe found Bevell on a hailmary type pass with 5:23 left in the game to get the Elks on the board. Their two point conversion failed at the Eagle led 35-6. Round Valley wasn’t finished though as Wolfe got into the endzone with 25.9 seconds left to make the final score 35-12.

With the win, the Eagles have won 20 consecutive games since their last loss on October 13th, 2017 and finished the season with a perfect 14-0 record.

The 12 points scored by Round Valley was the most a 2A team scored against the Eagles since Pima put up 12 on September 28th.