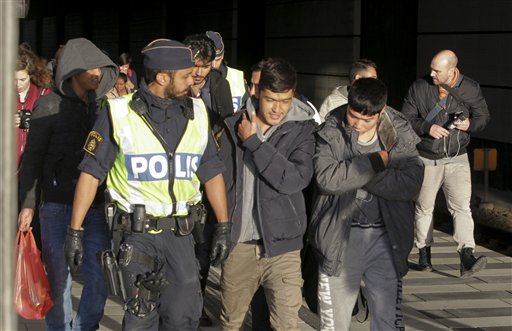 A group of migrants off an incoming train are escorted by Swedish police officers as they gather on the platform at the Swedish end of the bridge between Sweden and Denmark in Malmo Sweden. Swedish police are urging people traveling to and from neighboring countries on Thursday to bring their passports or other identification documents as the country introduces temporary border controls. The move announced by the government late Wednesday means that Sweden is temporarily suspending the European Unions passport-free travel rules to control the flow of migrants entering the country from Denmark and Germany. (Stig Ake Jonsson/TT via AP) SWEDEN OUT

VALLETTA, Malta (AP) — The European Union pressed African leaders on Wednesday to take back thousands of people who do not qualify for asylum, as overwhelmed Slovenia began building a razor-wire border fence to keep migrants at bay, raising tensions with neighboring Croatia.

Sweden, struggling to manage the influx too, became the latest EU nation to announce the introduction of temporary border controls, as of Thursday.

According to the International Organization for Migration, almost 800,000 people have entered Europe by sea this year. The EU predicts that three million more could arrive by 2017.

The Europeans say most Africans are coming in search of work and should be sent home, but many deliberately arrive without documents and must wait months before they are taken back.

At an EU-run summit in Malta, African leaders are set to commit “to cooperate with the EU on return and admission, notably on travel documentation,” according to the latest draft of an “Action Plan” being drawn up.

The president of Niger — a major transit route for Africans heading to lawless Libya in the hopes of crossing the Mediterranean to Europe — was cautious about opening the floodgates for people to return.

“We are open to talk about it. Everything will depend on the conditions that will be put in place for when they arrive,” President Mahamadou Issoufou told reporters in the Maltese capital Valletta, adding that the best method of solving Europe’s migration crisis is to attack the root causes forcing people to leave in the first place.

“We can put security measures in place, but the flow will remain difficult to stop as long as we don’t take measures to reduce poverty,” he said.

The EU is working closely with Niger to stem the flow of migrants toward Libya, and ultimately to Europe. It is also trying to seal deals with Morocco, Tunisia and Egypt. One was signed with Ethiopia as the two-day summit began.

The move gives Ethiopia — a major hub for people trying to reach Europe — access to money from a 1.8 billion euro ($1.9 billion) trust fund.

But the head of the African Union expressed concern that moving on returns too quickly might result in the building of reception centers where people are held until they can be granted asylum or be sent home.

She warned that women and children would be in danger if held there, and she also hit out at some European countries that “have taken a fortress approach” to migration.

In Slovenia, meanwhile, tensions mounted after troops began erecting razor-wire along the Sutla River that divides the country from Croatia, and further southwest near the town of Gibina.

Tensions mounted when Croatian authorities said parts of the fence were in disputed territory. AP journalists saw Croatian police demand that Slovenia take down a section of the fence.

Croatian special forces arrived at the Harmica border crossing, while armed Slovenian special police watched from the Slovenian side. A helicopter flew above illuminating the area with a spotlight before the Croatian forces pulled back.

Slovenia denies that any part of the planned 80-kilometer (50 mile) fence is on Croatian soil. Both countries are already locked in an old territorial dispute dating from the breakup of Yugoslavia in the 1990s.

The tiny Alpine state expects some 30,000 new migrants to arrive and fears that if neighboring Austria restricts their entry, the thousands would be too much for it to handle.

“If we don’t act on time,” Prime Minister Miro Cerar said, “this could cause a humanitarian catastrophe on the territory of Slovenia.”

Nearly 170,000 migrants have crossed into Slovenia since mid-October, when Hungary closed its border with Croatia and the flow of desperate people heading to Western Europe was redirected to Slovenia.

In Sweden, Interior Minister Anders Ygeman said border controls will be introduced at 1100 GMT (6 a.m. EST) on Thursday and last until Nov. 21.

He said the move was a way to “bring order” to the Swedish asylum system while sending a signal to the EU.

It wasn’t immediately clear whether the move would allow Sweden to turn people away at the border. But it would prevent people from staying in the country illegally, or transiting through to reach neighboring Finland and Norway.

Fredrik Bengtsson, spokesman for the Swedish Migration Agency, said the agency is currently picking up people by bus at the border and driving them to its offices, but “once they get there quite a lot don’t enter and get registered but disappear.”

Arriving migrants will now have to decide whether to apply for asylum in Sweden or turn back, Ygeman said. Most migrants come to Sweden by boat from Germany or across the Oresund bridge from Denmark.

In other developments, 14 migrants, including seven children, drowned early Wednesday when their boat sank off Turkey, the state-run news agency reported. Divers were searching for more victims.

Emric reported from Gibina, Slovenia. Frances D’Emilio in Valletta and Karl Ritter in Stockholm contributed to this report.